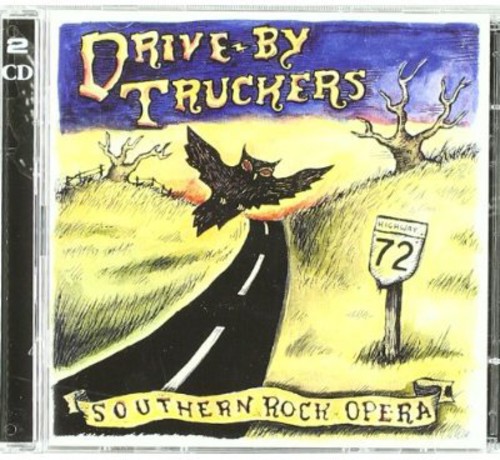 Now signed to Lost Highway, the Truckers are re-re leasing SRO to a primed, and larger audience. Major critics have been lauding the album since it's release, with features/reviews in Billboard, Magnet Pulse (4 stars), Amplifer, Village Voice (Dean's List).

Midway through the Drive-By Truckers' absurdly ambitious new double-CD,frontman Patterson Hood begins pontificating not once but twice about "thesouthern thing"-first on a fiercely proud song with that exact title,then on an astounding spoken-word-with-backing called "The Three GreatAlabama Icons." About, you know, Lynyrd Skynyrd leader Ronnie Van Zant,Neil Young-who've already been toasted on "Ronnie and Neil"-and,of course, George Wallace. And what should happen one song later but that thelatter gets his comeuppance? "Wallace" takes place in hell, shortlyafter Governor George's death, and is sung in the voice of the Devil: "Whenhe met St. Peter at the pearly gates/ I'd like to think that a black manstood in his way... Now the Devil's got a Wallace sticker/ On the backof his Cadillac."

Clearly, Hood is exorcising demons. On Southern Rock Opera-releasedlate last year on the Truckers' own Soul Dump label and recently pickedup by Mercury imprint Lost Highway-the primary spirit is that of LynyrdSkynyrd. The Truckers may have a three-guitar lineup, but their sound is bothgrungier and less bluesy than Skynyrd's. But when Hood and fellow singer/songwritersMike Cooley and Rob Malone begin detailing their heroes' tragic final airplaneride ("Shut Up and Get On the Plane," "Greenville to Baton Rouge,""Angels and Fuselage"), they get the feel so right it's almosteerie, down to guest vocalist Kelly Hogan singing the part of Cassie Gaines,the sister of late-period Skynyrd member Steve Gaines. Like most double albums,sprawling and overlong; unlike most, a triumph nevertheless.