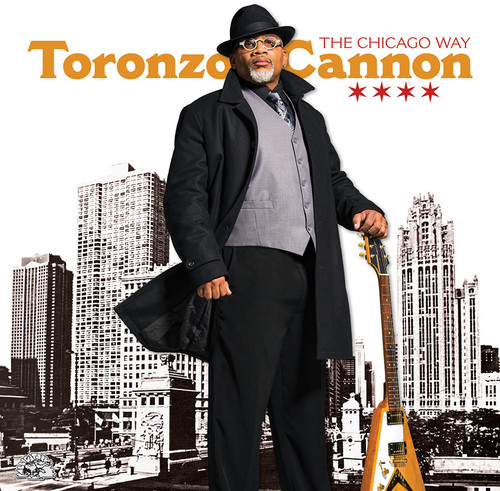 "One of Chicago's new greats" —The Chicago Sun-Times "Progressive as he is rootsy...Slow, simmering riffs and smoldering licks" —Chicago Reader Alligator Records has set a February 26 release date for The Chicago Way, the label debut for electrifying Windy City bluesman Toronzo Cannon.

The album is comprised of all self-penned songs, inspired by his deep, homegrown Chicago roots and powered by his blistering guitar playing and soul-baring vocals. The Chicago Way was produced by Cannon and Alligator president Bruce Iglauer. Cannon’s songs — from searing blues anthems to swinging shuffles to soulful ballads to roof-raising rockers — tell timeless stories of common experiences in uncommon ways. “I’ve never worked harder,” Cannon says. “I challenged myself at every step, writing each song to connect with someone in my audience. I try to write songs that will be both up-to-the-minute and timeless.” Throughout the history of Chicago blues, the intensely competitive local club scene has served as a proving ground, where only the best musicians rise to the top. Iconic blues artists from Muddy Waters to Howlin’ Wolf to Koko Taylor to Hound Dog Taylor to Luther Allison all paid their dues in the Chicago blues bars before making their mark on the world. The same holds true today, as newcomers look to living legends like Buddy Guy, Eddy Clearwater and Lil’ Ed Williams for inspiration in taking their music from Chicago to fans across the globe. Now, Chicago-born-and-raised blues guitarist /vocalist/ songwriter Toronzo Cannon is ready to write his own story as he claims his place as one of the city’s most popular and innovative blues musicians. Cannon’s unofficial launch from local hero to national star took place on June 13, 2015 at the world-renowned Chicago Blues Festival, where he performed as a festival headliner for the massive crowd. After announcing that he had just signed with Alligator Records, he delivered a riveting set, instantly earning tens of thousands of new fans. Original songs filled with razor-sharp solos rained from the stage, as Cannon melded the deepest Chicago blues with contemporary lyrics and soulful vocals. The Chicago Tribune lauded his performance, saying, "Festival headliner Toronzo Cannon’s extroverted, compelling guitar style and forceful singing won over a new audience." Cannon was born in Chicago on February 14, 1968, and grew up in the shadows of Theresa's Lounge, one of the city's most famous South Side blues clubs (and a place where Iglauer was a regular patron). As a child, Cannon would stand on the sidewalk outside the door, soaking up the live blues pouring out while trying to sneak a glance inside at larger-than-life bluesmen like Junior Wells or Buddy Guy. He also heard plenty of blues growing up in his grandfather's home, and listened to soul, R&B and contemporary rock on the radio. Cannon bought his first guitar at age 22, and his natural talent enabled him to quickly master the instrument. Although his first focus was reggae, he found himself increasingly drawn to the blues. "It was dormant in me. But when I started playing the blues, I found my voice and the blues came pouring out." He absorbed sounds, styles and licks from Buddy Guy, Albert Collins, Hound Dog Taylor, B.B. King, Albert King, Freddie King, Al Green, Jimi Hendrix, J.B. Hutto, Lil' Ed and others. Although influenced by many, Cannon’s biting, singing guitar sound is all his own. As a songwriter, he writes about shared experiences with a keen eye for detail. "Blues is truth-telling music," he says, "and I want my audience to relate to my stories." As a singer, his impassioned vocals add muscle and personality to his already potent songs.