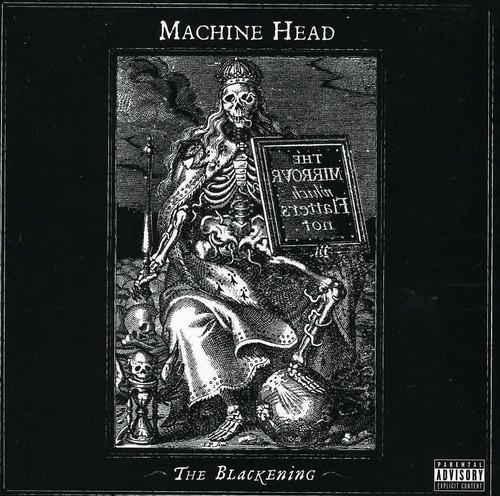 If Empires was the sounding of the trumpet, then The Blackening is the arrival of the hordes: dense, aggressive and inescapable. Produced once again by singer/guitarist Robb Flynn (Roadrunner United, Machine Head) and mixed by Colin Richardson (Bullet for My Valentine, Funeral for a Friend), The Blackening pushes the band's groundbreaking sound further than it's ever gone before.

To put it politely, Machine Head's career has had its highs and lows. After frontman Robert Flynn's old band Vio-lence helped pioneer the Bay Area thrash sound, Machine Head have spent the last 15 years with one eye towards Flynn's old thrash days and one on experimentation'"or calculation'"with "groove metal" (i.e., nu-metal that people are too polite to call nu-metal, but the dude was rapping on The Burning Red) and obligatory '80s cover songs ("Message in a Bottle"), while numerous lineup changes were chalked up to that old standby, "musical differences." Some fans figured the band had lost it for good, and one metal website joked that Flynn would use the promotion of Machine Head's then-brand-new album to disown it an advance and hype how the next one would be a "return to form."

Flynn probably won't be disowning The Blackening anytime soon. Somewhere along the past few years, with the rising popularity of prog-level musicianship and songwriting in metal and all that new protest music we were supposed to get but never really did, Flynn got ambitious. The Blackening opens with a 10-minute epic titled "Clenching the Fists of Dissent," and three other tracks crack the nine-minute mark. And he's got no time for "Message in a Bottle" loneliness when classic-thrash subject matter like religion, intolerance and, um, music journalists ("Aesthetics of Hate") are firing him up all over again. Here's hoping Flynn stays pissed, because The Blackening is far from a black mark on a long career in metal.