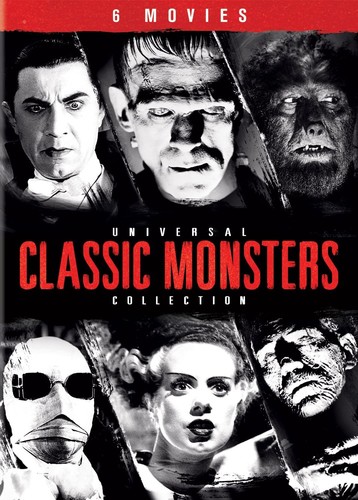 The Universal Classic Monsters Collection showcases 6 of the most iconic monsters in motion picture history including Dracula, Frankenstein, The Mummy, The Invisible Man, The Bride of Frankenstein and The Wolf Man. Starring Bela Lugosi, Boris Karloff, Lon Chaney Jr. , Claude Rains and Elsa Lanchester in the roles that they made famous, these original films set the standard for a new horror genre with revolutionary makeup, mood-altering cinematography and groundbreaking special effects. Featuring over 10 hours of revealing bonus features, each film has been digitally remastered for an unforgettable classic monster experience. Dracula Count Dracula leaves Transylvania and heads to London, where the vampire sleeps in his coffin by day and searches for potential victims by night. Frankenstein - Medical student Henry Frankenstein pieces together salvaged body parts and brings a human monster to life only to see his dreams shattered by his creation's violent rage. The Mummy - Accidentally revived after 3,700 years, Egyptian Mummy Imhotep sets out on an obsessive - and deadly - quest to find the reincarnation of his lost love. The Invisible Man - A doctor discovers a serum that makes him invisible only to find that it also slowly drives him insane and capable of committing unspeakable acts of terror. The Bride of FrankensteinA deranged scientist, Dr. Pretorius, forces Henry Frankenstein to help him create a female companion for the monster. The Wolf Man - After being attacked and bitten by a wolf in the woods, Larry Talbot becomes a cursed man who transforms into a deadly werewolf when the moon is full.