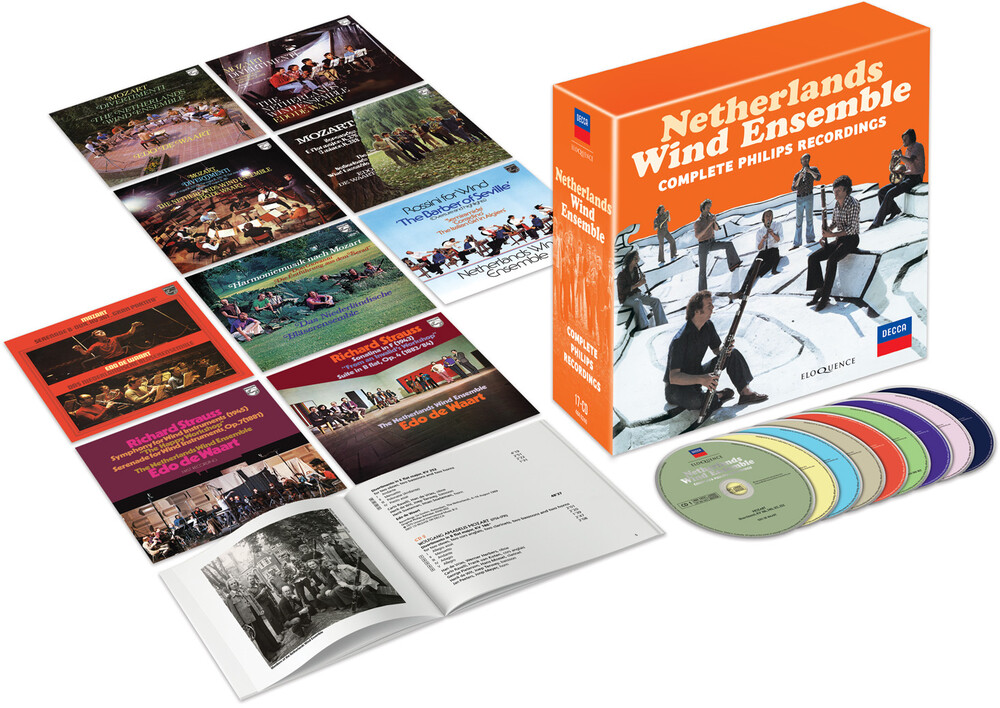 Issued complete for the first time, including several albums new to CD, is the Philips catalogue of the Netherlands Wind Ensemble - an ensemble that made a defining contribution to Dutch musical life in the 1970s. The Netherlands Wind Ensemble began life in 1959 as a wind quintet, but soon expanded to play Classical-era serenades and divertimenti which were hardly known at the time but have since been recognised and enjoyed as masterpieces of entertainment music, notably the Gran Partita of Mozart, the late Octet by Beethoven and the wonderful Octet-Partitas by his Viennese contemporary, Franz Krommer. Starting to record for Philips in 1968, the Netherlands Wind Ensemble immediately won critical praise for the technical precision of it's playing as well as the brilliance and wit of it's interpretations, whether led by it's regular conductor Edo de Waart (himself a former oboist and member of the ensemble) or played as true chamber music. The ensemble made one of the first comprehensive recordings of Mozart's wind music, including miniatures, no less delightful for their brevity and rarity, and a precious but little-known collaboration with the much-loved Dutch soprano Elly Ameling. The youthful, funky vibe of the Netherlands Wind Ensemble was captured by Philips both in exceptionally vivid recordings as well as kooky cover designs, which are reproduced on the sleeves of the issues. A booklet essay by Peter Quantrill outlines the history and character of the ensemble, drawing on a new interview with Edo de Waart. The repertoire extends into the nineteenth century with a classic account of the Wind Serenade by Dvorák - the ensemble's debut on disc - as well as ingenious arrangements of overtures and arias by Rossini, and a unique collection of 'little marches by great masters'. The Netherland Wind Ensemble's long-standing commitment to modern music is represented by the wind music of Richard Strauss and Stravinsky, and the pioneering Jazz Symphony by the Franco-American 'bad boy' of classical music in the 1920s and 30s, Georges Antheil, recorded live at the 1976 Holland Festival.