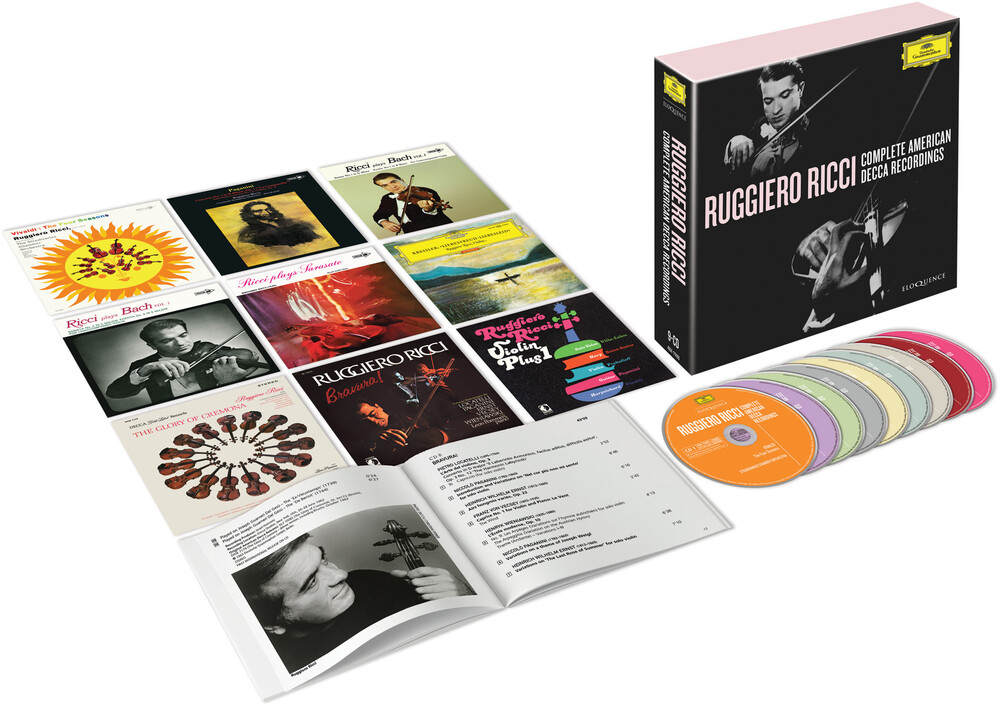 Several legendary but long-unavailable recordings freshly remastered in a comprehensive 'original covers' set of Ruggiero Ricci's recordings for American Decca during the 1960s. With definitive accounts of the Tchaikovsky Concerto and the Paganini Caprices recorded in 1950, Ruggiero Ricci became established as a Decca artist in the early days of LP. A decade later he began recording for Decca's American division, and between 1960 and 1970 he made nine albums of solo, recital and concerto repertoire which are gathered here in one set for the first time. Ricci had already recorded some of the solo Bach sonatas and partitas, but in 1967 he made his first complete set for American Decca. Tully Potter's illuminating booklet essay explains how a snowstorm forced Ricci to hole up in a hotel for several days prior to the sessions, and his devoted his time to perfecting his interpretations of Bach. Ricci was renowned for the astonishing virtuosity that enabled him to tackle the Caprices and Concertos of Paganini without breaking sweat - he became the first great exponent of the composer in the LP era with his Decca recordings - and he remade the Second Concerto for American Decca in 1964 with the Cincinnati Symphony Orchestra conducted by Max Rudolf: one of several albums here receiving it's first international release on CD. The American Decca legacy of Ricci also included several 'concept albums' which soon became collector's items. The set opens with the first of them from 1964, on which the violinist plays The Four Seasons of Vivaldi on four different Strads, one for each concerto, with a string ensemble fielding another ten Strads for a uniquely rich string sound. Two years earlier, Ricci had made "The Glory of Cremona", which saw him play fifteen priceless violins in sessions attended by two security guards. Even these two projects pale beside the astonishing virtuosity on display in "Bravura!", which collects some of Ricci's favourite "knuckle-breakers" by Paganini, Wieniawski and Ernst. The set closes with another album new to CD, "Violin Plus 1" from 1970, which paired Ricci with five different musicians for a unique display of his versatility, accompanying soprano Lee Venora in Villa-Lobos, taking the spotlight in a Saint-Saëns Fantaisie for violin and harp, and meeting David Nadien as an equal in the Sonata for Two Violins by Prokofiev. As well as one of the last century's most spell-binding technicians on the violin, Ricci was a complete musician, to whom this set pays eloquent tribute.