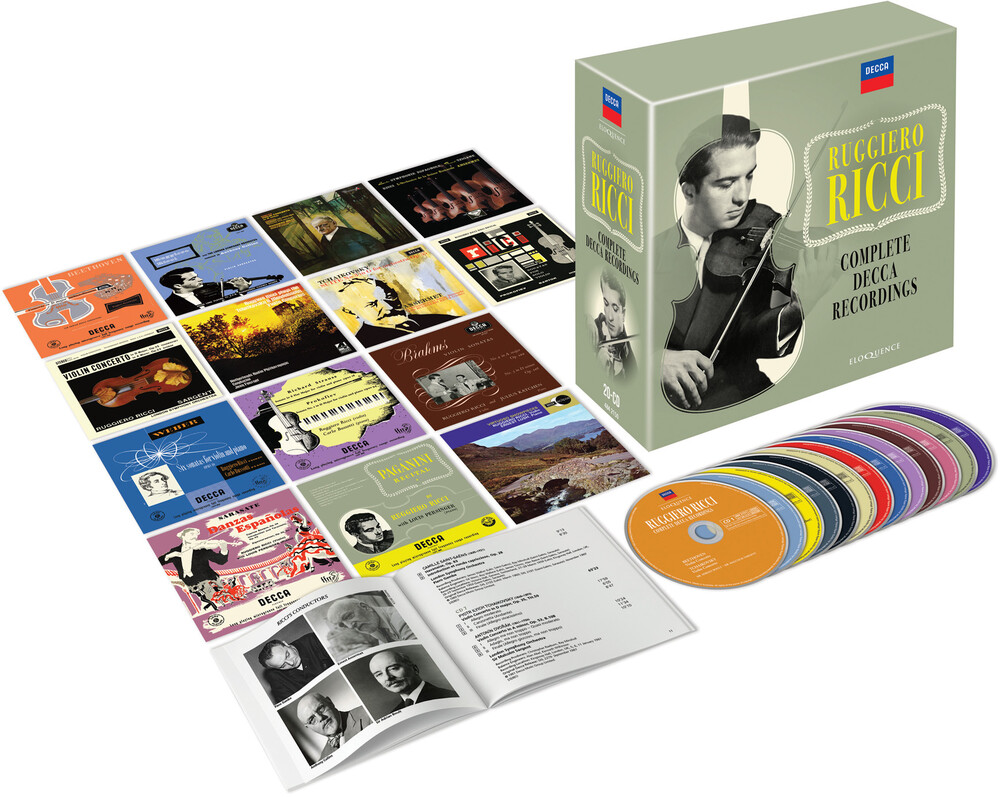 The most complete tribute ever issued to the fiendish fingers and sublime artistry of a true virtuoso, Ruggiero Ricci: a feast of concerto, solo and recital repertoire recorded by Ricci, collected together for the first time, and including a previously unpublished set of the Brahms Violin Sonatas. Born Roger Rich to an Italian immigrant father on a Californian army base in 1918, he became Ruggiero Ricci when he was introduced to the New York musical public as a child prodigy violinist. By the time of his debut on Decca - the Tchaikovsky Concerto conducted by Sargent in 1950 - he was an experienced performer and recording artist who had already stunned audiences on both sides of the Atlantic with the solo-violin repertoire he would make his own: not only Bach but also Ysaÿe, Wieniawski and most of all Paganini, whose Caprices he was the first to record complete later in 1950. At the close of the Tchaikovsky sessions, the musicians of the New Symphony Orchestra burst into spontaneous applause. A new and typically illuminating essay by Tully Potter on Ricci's life and recorded legacy draws on previously unpublished correspondence and sheds light on the background to many of these recordings. Notable records of Ricci's famous cantabile in concerto repertoire include a hugely influential Paganini album with Anthony Collins and a gripping account of the Sibelius with Oivin Fjeldstad. There are two recordings of the Mendelssohn (1957 and 1974), the first with another 'prodigy', the conductor Piero Gamba, and the second recorded in Decca's Phase 4 stereo with Jean Fournet. He strikes sparks in partnership with Ernest Ansermet for Ravel's Tzigane and the solos in Tchaikovsky's Orchestral Suites. These (Suites Nos. 3 and 4) as well as sections featuring the solo violin, from the Fistoulari 'Phase 4' recording of Swan Lake, are included in this collection. Decca partnered Ricci with several notable pianists for recital repertoire, starting with his former teacher Louis Persinger and including Friedrich Gulda. Many of these chamber recordings (a Sarasate album, sonatas by Weber, Richard Strauss and Prokofiev) were made not in the Decca studios but in Ricci's home in New Jersey. While he recorded the Second and Third Brahms Sonatas with Julius Katchen in London in 1957, he also taped the cycle of three sonatas at home with Katchen three years earlier. These 1954 performances are issued here for the first time: essential listening for all fans of great violin playing.