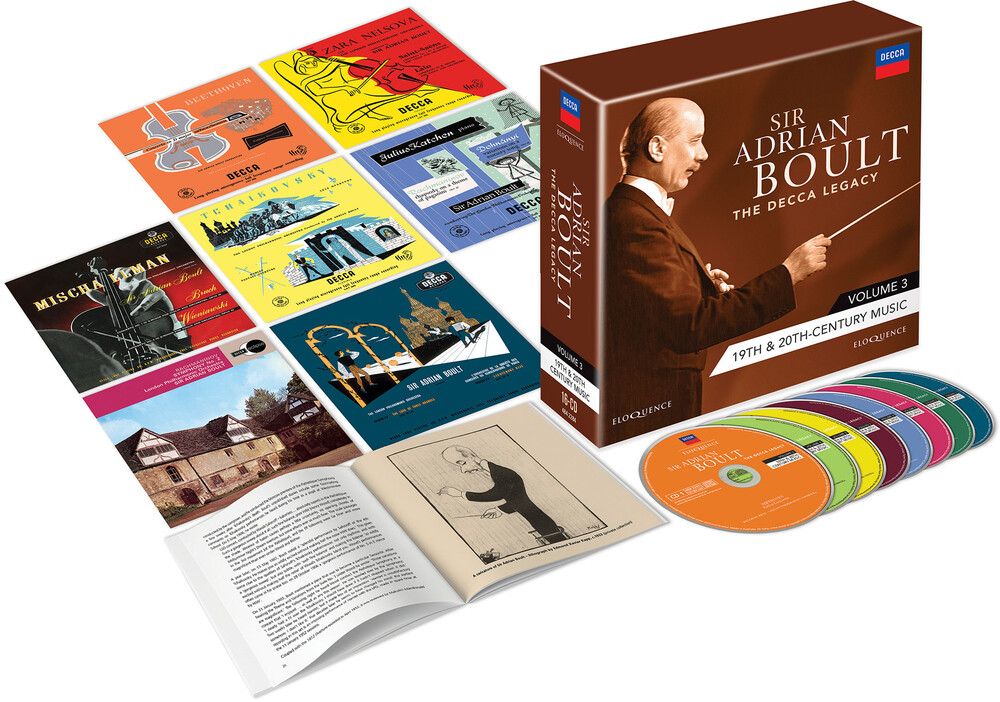 The third limited edition volume of Boult's complete Decca recordings features Boult the insightful accompanist and inspired Russian interpreter, featuring many long-unavailable and newly remastered Decca recordings. After twenty years as the BBC's director of music, Sir Adrian Boult was unceremoniously 'retired' by the corporation in 1950. Still in the prime of his career, Boult continued to conduct the BBC Symphony Orchestra as it's chief conductor, but meanwhile began to make commercial recordings for English labels such as Decca and Nixa, enabling American audiences in particular to hear a conductor previously confined by and large to his own shores, and in top-of-the-range studio engineering. While Decca capitalized on Boult's reputation as a master of English and choral repertoire, with a pioneering Vaughan Williams symphony cycle, mono and stereo versions of Messiah and much else made available in the two companion boxes on Decca Eloquence, the label also took advantage of his easy relations with many of the great instrumental soloists of the day. At the BBC Proms and elsewhere, he had made music with the likes of Alfredo Campoli, Mischa Elman and Sir Clifford Curzon for decades, and there is a special familiarity and ease of communication about their concerto recordings together. Boult also partnered exciting younger virtuosos such as the pianists Peter Katin and Friedrich Gulda, always attentive and dynamic in partnership. The new box brings together both mono and stereo-era versions of Dohnányi's once-popular Nursery Variations and Rachmaninoff's Paganini Rhapsody in which Boult strikes up an intuitive rapport with Julius Katchen. Boult's very versatility told against him: sometimes viewed then and now as a good all-rounder, he loses nothing to the competition for authentically Russian fire and balletic grace in symphonies by Tchaikovsky (the Third - appearing her in stereo for the first time) and Rachmaninoff (the Second and Third, repatriated from RCA to Decca). Prokofiev suites are infused with wit and pungent orchestral color. And whichever orchestra he was conducting, Boult elicited the best from them with collegial authority - even the very French-sounding winds of the Paris Conservatoire Orchestra. This 'original covers' box restores the recordings to their LP couplings and features a new essay on Boult by Nigel Simeone.