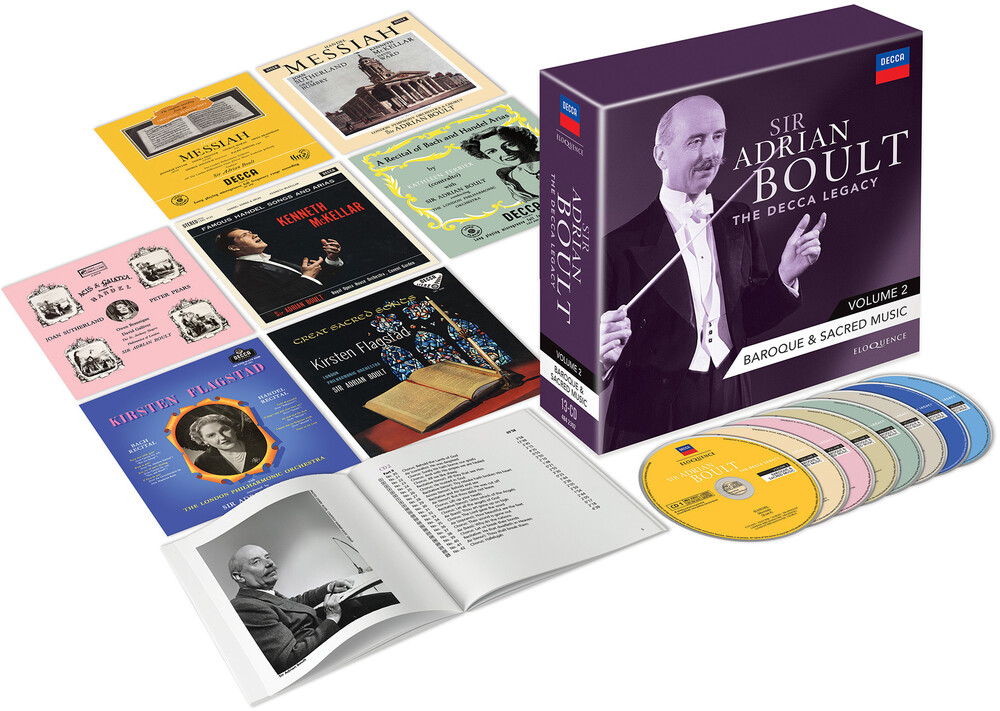 The second limited edition volume of Sir Adrian Boult's Decca legacy brings together the conductor's Messiah recordings of 1954 and 1960, plus Baroque and sacred music recitals from Kenneth McKellar, Kirsten Flagstad and Kathleen Ferrier. While hardly a 'period-instrument' pioneer, Sir Adrian Boult had a much surer sense of authentic Handelian style than most of his contemporaries. Editions and performances of Handel's masterpiece were still often cut and loaded with Romantic trappings in 1935 when Julian Herbage prepared the most complete version of the score yet made, with Handel's original instrumentation. Boult began performing this version in 1942 and it was the obvious choice for a new, refreshing perspective on the piece when he came to record it for Decca in 1954. Listeners and critics alike were struck by the energy of Boult's direction, the purity and simplicity of the solo singing and the vivid Decca engineering. These qualities also distinguished the stereo remake, made with similarly slimmed-down forces and featuring Dame Joan Sutherland on the top line. She also contributed to the success of Boult's Acis and Galatea from 1959, and the box is completed with a series of glorious vocal recitals, from the tenor Kenneth McKellar, the soprano Kirsten Flagstad and the contralto Kathleen Ferrier, all accompanied by Boult in Baroque repertoire with the sensitivity to line that made him so underrated and underused as an opera conductor. Ferrier recorded this selection of Bach and Handel arias a year before her death in 1952, but eight years later Boult and the LPO returned to the studios to produce a stereo accompaniment for the album, which the Decca producer James Walker mixed with Ferrier's part from 1952: an early and remarkably successful example of the technology later used to 'update' classic recordings of Caruso and Callas.