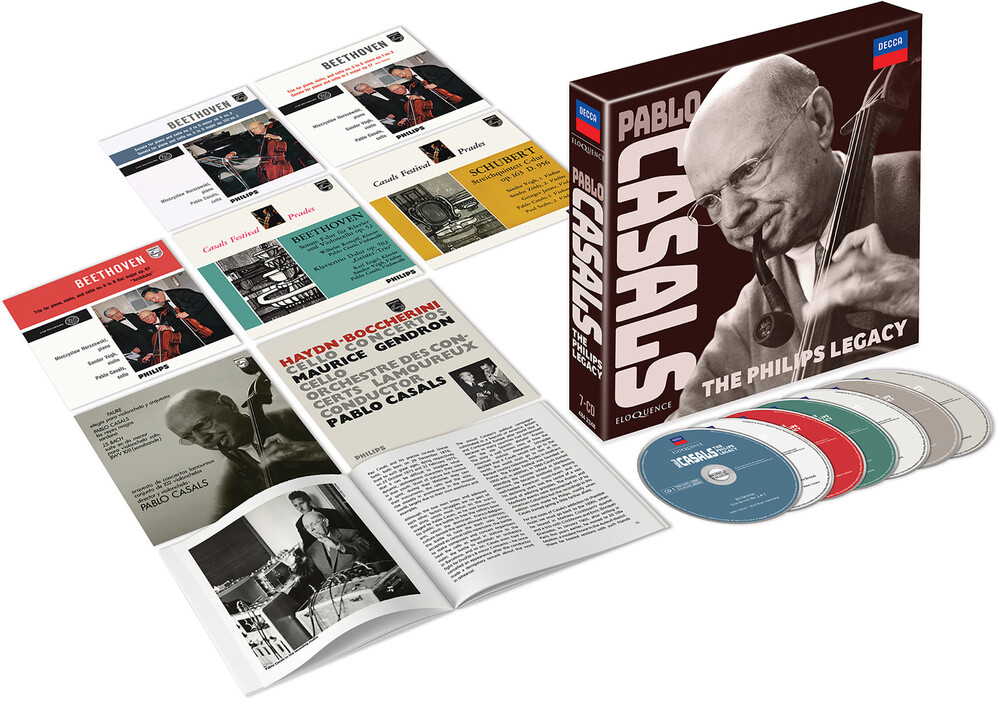 Limited Edition 7CD Box Set. The late chamber recordings made by the great Catalan cellist with longstanding friends and colleagues, including two versions of Beethoven's 'Ghost' Trio, the 1956 'Hommage à Pablo Casals' LP, and the Schubert String Quintet with the Végh Quartet. Includes CD premieres. In September 1958, the 81-year-old Pablo Casals took part in the (now annual) Beethovenfest held in the composer's home city of Bonn. His music-making had lost none of it's carefree spirit, and Philips quickly issued these live recordings of Beethoven sonatas and piano trios made in the intimate space of the music room of the Beethoven House. They preserve the cellist on liberated and exhilarating form in a transcription of the Horn Sonata and the Second and Fifth Cello Sonatas, accompanied by the Polish pianist who had been a chamber-music partner since the 1930s, Mieczyslaw Horszowski. These understated masters of an essentially 19th-century playing style were joined in three piano trios - including the 'Ghost' and 'Archduke' - by a Hungarian violinist from a younger generation, Sándor Végh, whose sweet tone and supple rubato also comes from another age. Three years later, at the cellist's festival in his adopted Pyreneean home of Prades, Philips captured an equally spontaneous account of the First Cello Sonata with Wilhelm Kempff (a mere 66 at the time) and another 'Ghost' with Végh and the Swiss pianist Karl Engel. These are performances embodying Casals's wise and patrician personality as a musician, yet never solemn and always responsive to his colleagues and the spirit of the occasion. Also captured at the 1961 festival, the account of the Schubert Quintet featured gains special warmth from the Hungarian line-up, in which Végh leads his compatriots Sándor Zöldy, Georges Janzer and Paul Szabo, with Casals taking the second cello part. The 'Ghost' Trio with Horszowski receives a first release on CD in this box, along with another Philips LP made live at the Sorbonne in Paris in October 1956. Casals conducts the Lamoureux Orchestra in a deeply felt performance of Faure's Elégie, with the solo part taken by the orchestra's fine cello section in unison. A 25-minute rehearsal sequence brings fascinating insights into Casals's working methods and his passionate but practical engagement with the music at hand. Casals as conductor in Paris also neatly rounds off the set: the 1960 LP of concertos by Haydn and Boccherini with his pupil Maurice Gendron: aristocratically moulded versions that retain their musical virtues in these period-aware times, and the first-ever recording of the Boccherini to return to the original score rather than the heavily rewritten Grützmacher edition. Tully Potter's new essay completes a set which should appeal to Casals enthusiasts, collectors and cellists alike.