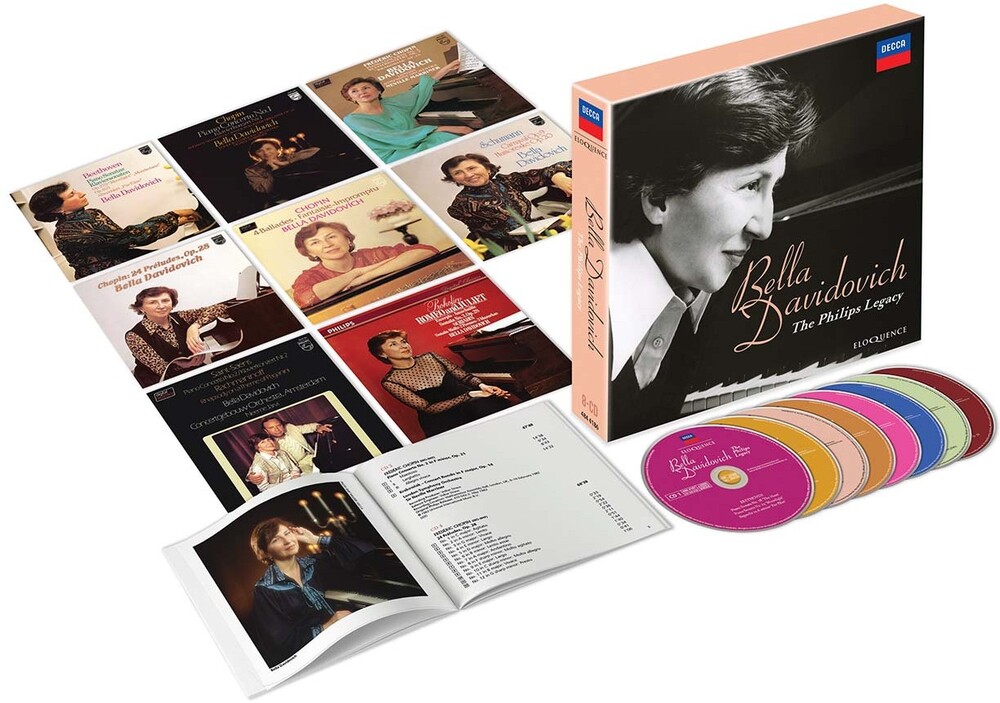 The Philips recordings of Russian pianist BELLA DAVIDOVICH, collected together for the first time on CD and digitally. Includes recordings previously unreleased on CD and digitally. 'Why is everyone writing about me?' the pianist Lazar Berman once exclaimed. 'Why don't you write about Bella Davidovich? She's more interesting than me. She's superb!' Born in 1928 in Baku, the capital of Azerbaijan, the musician acclaimed by Berman as Russia's 'greatest female pianist' shared first prize in the 1949 Chopin Competition at Warsaw with Halina Czerny-Stefanska. Thereafter she was mostly confined to the Soviet Union until she was allowed to emigrate to the US in 1978. When she did so, the intensity of expectation surrounding her arrival and early appearances approached that given to Sviatoslav Richter in the late 1950s. Her debut recital at a sold-out Carnegie Hall evoked an atmosphere usually associated with Horowitz concerts. 'Russia's best-kept secret', shouted the advertisements for her first Philips recordings, but critics were quick to observe that Davidovich did not fit the popular stereotype of the broad-scaled romantic Russian pianist, overpowering the music at every turn. She brought a poetic approach to everything she played, and Philips recorded her in repertoire which played to her strengths, beginning with Swiss sessions in March 1979 of Beethoven sonatas, Schumann's Carnaval and Chopin's Preludes. More Chopin followed, including the concertos accompanied by Sir Neville Marriner - and then an album of Rachmaninov and Saint-Saëns at the Concertgebouw, where she had established a warm rapport with both the Dutch orchestra and audience some years before her emigration. The recordings on this collection date from 1979 to 1983, and Davidovich's Philips discography came to an end with a recital of Scriabin and Prokofiev (including a superbly pointed selection of pieces from Romeo and Juliet), issued in 1985. Featuring original covers, the set is annotated with a new essay by the piano historian Mark Ainley partly based on conversations with Davidovich's son, the violinist Dmitri Sitkovetsky.