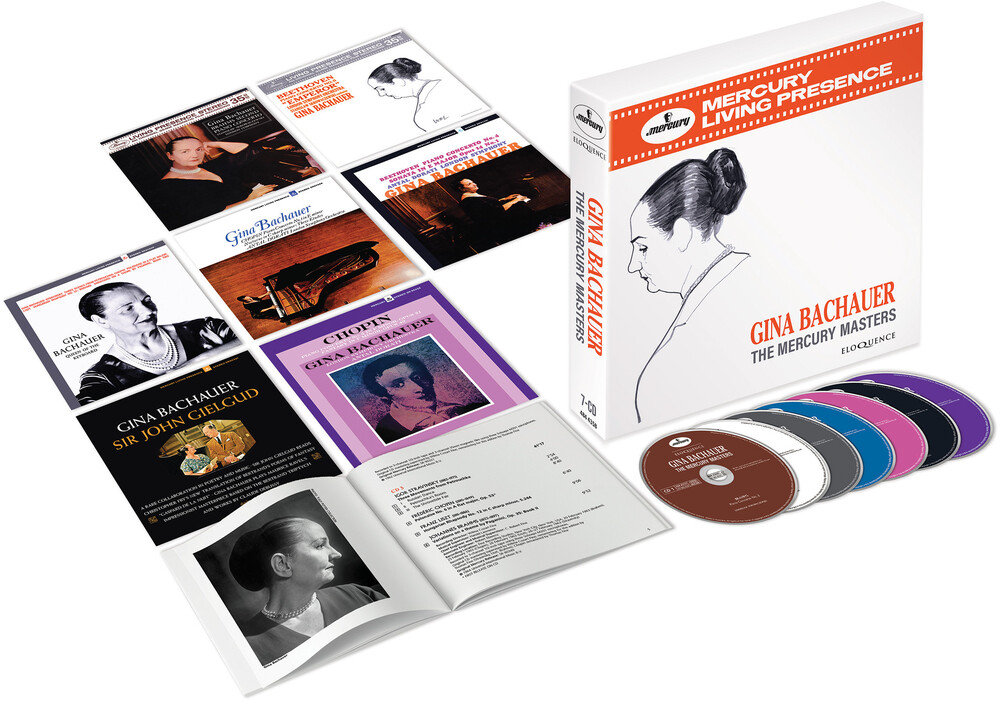 Limited Edition 7CD box set features seven classic Mercury Living Presence albums, newly remastered and compiled for the first time to celebrate the legacy of Greek pianist Gina Bachauer, who thrilled audiences and challenged stereotypes wherever she went. Born in Athens in 1913, Gina Bachauer studied Bach with a pupil of Busoni; Brahms with Rachmaninov; and Ravel with Cortot. Can any other pianist, alive or dead, lay claim to so rich a treasury of study and instruction? That all three luminaries of the piano regarded her worth teaching tells it's own story. In mid-life, she suffered a series of catastrophes: her family killed and property destroyed in the Nazi occupation of Greece; then the deaths of her first husband in 1950 and her father two years later. She emerged as a person and a pianist of immense character and resolution. Her records capture only a fraction of her repertoire - and some said of her temperament, for those who saw her in concert - but the Mercury albums she made between 1962 and 1964 are representative of her powerful mastery of several landmark works, beginning with Brahms's Second Piano Concerto. The Fourth and Fifth concertos of Beethoven and the two concertos of Chopin followed, attracting particular praise for the rapport of Bachauer's partnerhip with the conductor Stanislaw Skrowaczewski. Then there were solo albums of pianistic Everests such as Gaspard de la Nuit, which offered a unique and quirky pairing of Ravel's cycle with the three poems by Aloysius Bertrand which inspired it, read by Sir John Gielgud. Reception of Bachauer's recordings was gendered to a degree hard to understand today except through the prism of assumptions about what constituted 'male' and 'female' repertoire. Becoming the first woman to record Stravinsky's Three Pieces from Petrushka, playing concertos by Brahms and Rachmaninoff, Bachauer was a woman in a man's world, as she very well knew: 'It is hard for a woman, without the broadness across the shoulders... It is hard for a woman to have the stamina for travelling... and it is hard to make the decision not to have children.' This complete survey of Gina Bachauer's Mercury recordings is presented as an 'original covers' collection with a new booklet essay by the piano scholar Mark Ainley, with remastering by Thomas Fine.