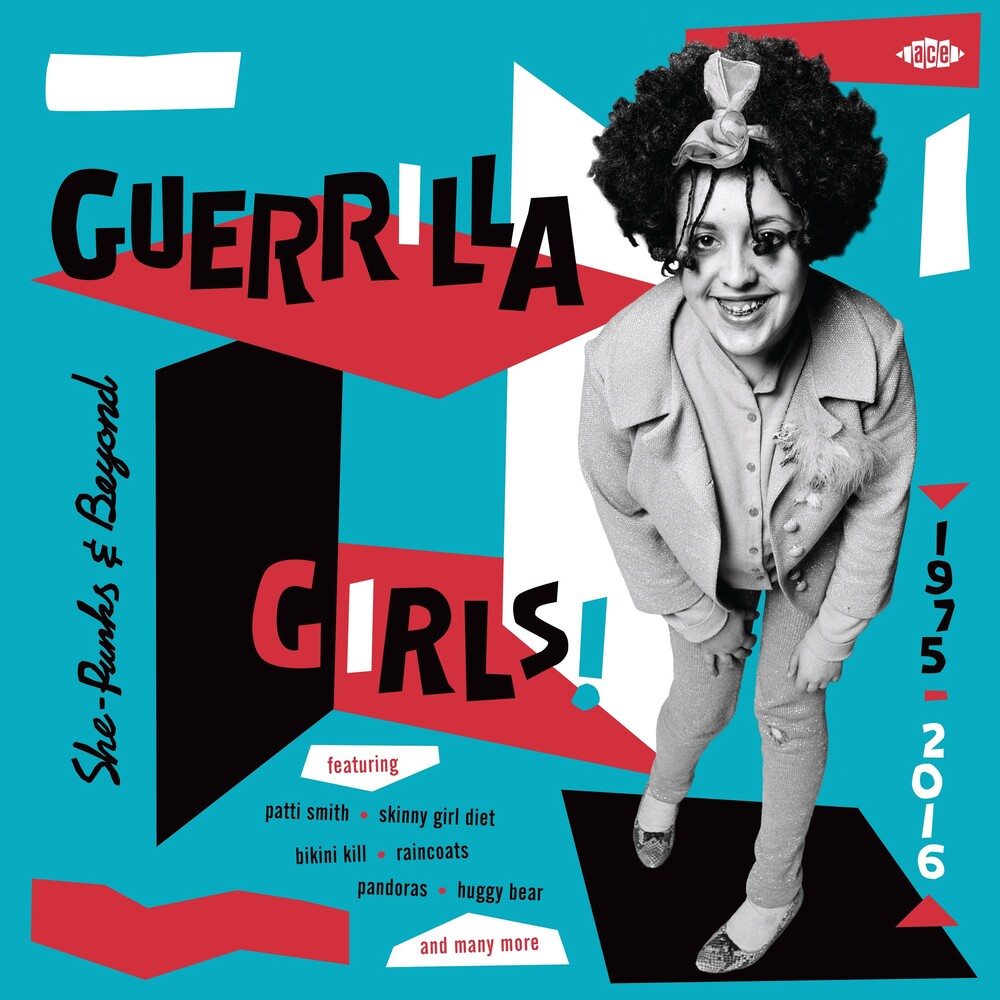 "Guerrilla Girls!", Ace Records' much-anticipated first release of 2023, takes us on a thrilling ride from punk's mid-70s origins, via the left-field post-punk groups, jangly female combos, grunge bands and vigilante Riot Grrrls of the 80s and 90s, to the she-punk bands of recent years - a five-decade alternative to the macho hegemony of rock. The collection highlights songs that emerged out of a dynamic underculture of female creative expression. What unites the featured artists is a healthy disregard for the way the music industry ties up it's female performers into pretty, neo-liberal packages. From Patti Smith, universal mother of the punk movement, to the Bags, Bikini Kill and Skinny Girl Diet, this music is anti-A&R. Including lesser-known names such as San Francisco street punk Mary Monday and London-based experimentalists pragVec, it shows that, rather than being a few novelty bands existing on the margins, these performers represent a stronger, more three-dimensional version of the female experience. Glorious resistance was on display in the first wave of UK female-fronted punk bands. Poly Styrene's charged vocals on X-Ray Spex's 'Iama Poseur', for instance, were a deliberate refusal to be a pretty punkette. With 15 year-old Lora Logic on saxophone, X-Ray Spex epitomised a fearless, self-defined agency that was at odds with the pastel shades and flowery, submissive Laura Ashley version of 1970s girlhood. By the early 80s, there was a hugely vibrant scene propelled by the diverse rhythms and voices of post-punk feminism. Lora Logic had left X-Ray Spex to form the interweaving textures of Essential Logic, the Mo-dettes mangled ska and off-kilter pop, and Birmingham band Au Pairs sliced political rigour into their lyrics and funky guitar work. Some female artists took that elemental energy into pop, creating pop-punk with a twist. We've Got A Fuzzbox And We're Gonna Use It!! made a statement on music technology and female power with a cheeky play on words. Their song 'Rules And Regulations' shows that what Guerrilla Girls do well is debunking - taking genres of popular song and turning them inside out - like the way the Pandoras and the Pussywillows would amp up the driving beat and high vocals of the 60s girl group style, and subvert it with a DIY garage element. In it's fanzine culture, use of montage and DIY music, 90s Riot Grrrl bands such as Bikini Kill and Bratmobile drew direct inspiration from 70s punk, articulated through the prism of Third Wave feminism. Too often, Riot Grrrl gigs were invaded by men intent on heckling "the enemy". Liz Naylor, manager of British Riot Grrrl band Huggy Bear, says that their concerts became war zones. From the US grunge and Riot Grrrl scenes emerged more female instrumentalists, with bands such as L7 and Babes In Toyland proving that it was possible to recruit cutting-edge drummers, bass players and guitarists. Lori Barbero, whose relentless power drumming is a major element of Babes In Toyland, took the one instrument that has been a staple of male rock'n'roll and made it her muse. In the 2000s a new generation of girl-punk bands drew on the Riot Grrrl underculture to form their own sound. London trio the Tuts refashioned C86, Riot Grrrl and lush dream pop on songs like the ironically titled 'Let Go Of The Past', while the Regrettes injected shots of ska and doo wop into their explosive West Coast pop-punk. What began with Patti Smith and 70s punk has grown into a vast, spikey infrastructure of girl music. Many take inspiration from their foremothers, like Skinny Girl Diet whose vigilante feminism and punk distortion has been championed in return by Viv Albertine of the Slits. As long as these female artists stay aware of their musical vision and what they are trying to express - in a sense, A&R themselves - the underculture will continue to grow and flower. And this "Guerrilla Girls!" compilation is a celebration of that power