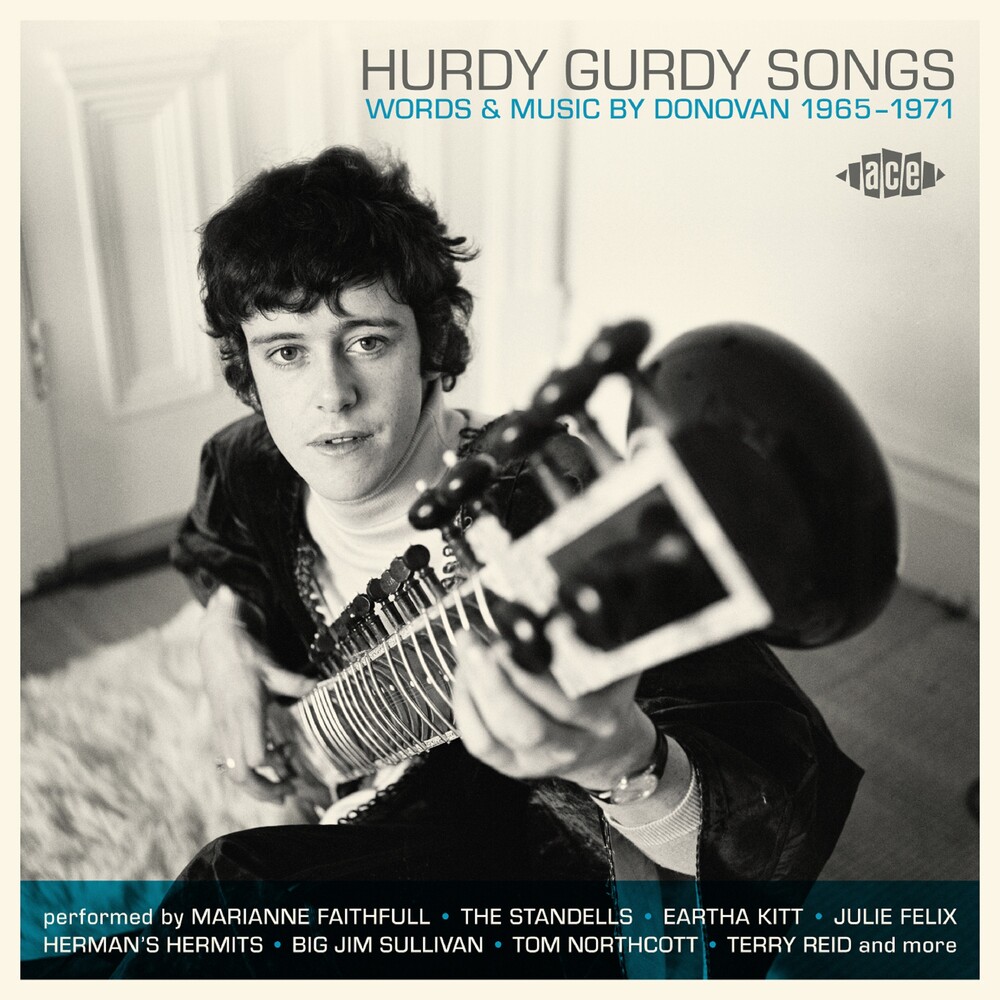 The latest in Ace Records' popular Songwriters series is a kaleidoscopic trip into the craft of one of the most covered and influential artists of the 60s. The body of work he wrote and recorded during the golden period we celebrate on "Hurdy Gurdy Songs" has become one of the most critically and commercially successful of the era, and continues to attract new listeners and demand reappraisal; proof that Donovan - the psychedelic minstrel whose records coloured the late 60s pop landscape - was one of a kind. Painted by the pop press as a knock-off Dylan during his mid-60s breakthrough, Donovan could easily have contented himself with that opening brace of transatlantic hit singles, 'Catch The Wind' and 'Colours'. Instead, he began a startling reinvention that saw the Woody Guthrie and Ramblin' Jack Elliott stylings jettisoned in favour of a poetic, experimental ideology inspired by his embrace of Zen Buddhism, esoteric writing and the burgeoning drug culture. What followed was a flood of songs that mirrored the thinking of the times. In December 1965, he recorded 'Sunshine Superman' at Abbey Road under the tutelage of producer Mickie Most, utilising a crack band of UK session players. The template had been set and would prove to be a winning formula that birthed five studio albums and ten hit singles over the next four years. His esoteric new agenda increased his appeal and success instantly. His songs began attracting cover versions from every corner of the music world. High-profile folk artists, rock bands and pop acts plundered his catalogue with glee. His popularity soared in 1967, particularly in the US where the "Sunshine Superman" and "Mellow Yellow" albums were released in their intended form. UK listeners had to wait until the hybrid "Sunshine Superman" set to hear key Donovan recordings such as 'Season Of The Witch', 'Celeste' and 'Young Girl Blues' for the first time. A prolific writer, he gifted a number of songs to other artists: 'You Just Gotta Know My Mind' and 'Snakeskin' appear on our collection and serve to illustrate the widespread appeal of his material to female interpreters as diverse as Eartha Kitt, Peggy Lipton and Bridget St John. Donovan's whirlwind journey through the second half of the 60s left him beaten and bruised but the music he created - in which the eclectic influences of pop, spirituality, poetry, magic and the spirit of the age found their way into these unique and enduring songs - continues to thrill and beguile today