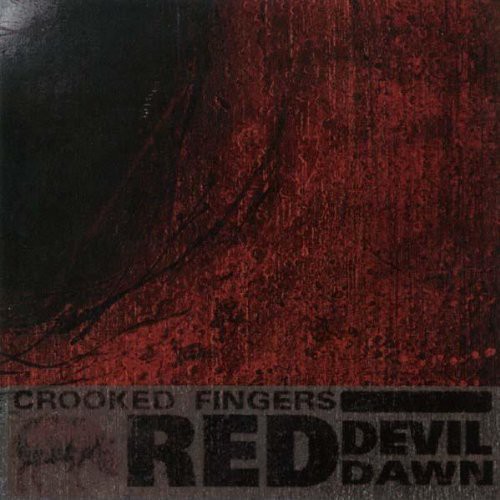 The thrid full-length andfirst and Merge from one of the rock underground's most enigmatic songwriters - Eric Bachmann (ex-Archers of Loaf ftonman). Intricate tales of desperation, betrayal, loss and survival.

Given the broken-voiced gutter-drunk persona that former Archers of Loaf/BarryBlack main man Eric Bachmann's latest project projected on its first coupleof records, it feels weird to use the terms "upbeat" and "CrookedFingers album" in the same sentence. But that's what Red DevilDawn is, if only in terms of tempo. The songs here go by a hair quickerthan his normal pace, and while his junkshop-cum-backwoods arrangements alwaysshowed plenty of flair, here they're downright baroque: seven musiciansbesides Bachmann are credited, including a violinist, a cellist, and two trumpeters,and even more important, they sound less like a conglomeration than a living,breathing band. Maybe Bachmann was inspired by last summer's ReservoirSongs EP, on which he covered Bruce Springsteen, Kris Kristofferson andPrince, to write and arrange in a more polished manner this time around.

In a way, that's Red Devil Dawn's weakness: the craggy, TomWaits-esque feel of Crooked Fingers' earlier records came across as personalin a way that this one doesn't. Which isn't to say he doesn'tmean every note of the rising strings and Herb Alpert horns on "You Threwa Spark" and "Sweet Marie." It also doesn't explain howdoleful songs like "Boy With (100) Hands" are the least memorablethings on the album. He also hasn't been this forthrightly funny sincehis Archers days—"Sweet Marie" is a bawdy cheating anthem thatGarth Brooks really ought to cover—nor has he put so many chin-up songs("Don't Say a Word," "Angelina") in one place. Morethan a decade into his career, Bachmann's still got new avenues to explore.How gratifying.