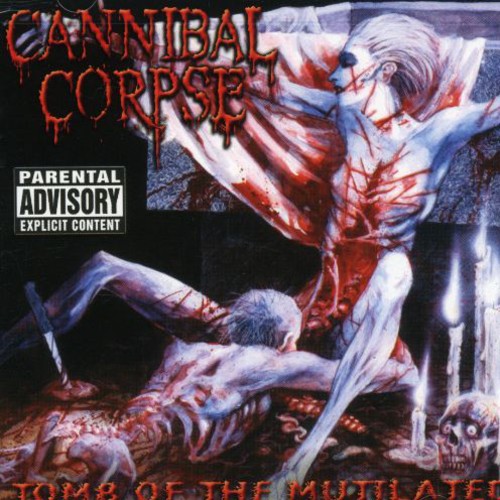 Digitally remastered edition containing additional multimedia material. 1992 release, the third album from the Death Metal band, Tomb of the Mutilated was their last album to feature founding guitarist Bob Rusay. The album was banned in Germany, due to the violent cover and the extreme nature of the lyrics.

''Tomb of The Mutilated'' is the third studio album by American death metal band Cannibal Corpse. It was released in 1992 through Metal Blade Records and is the last album featuring founding guitarist Bob Rusay. The album was banned in Germany until June 2006, due to the extreme nature of the lyrics.

Because the liner notes on ''Tomb of the Mutilated'' feature quotations from American serial killer Albert Fish, Fish is often incorrectly credited with being the voice at the beginning of "Addicted to Vaginal Skin". However, the taped confession heard at the beginning of the song most likely belongs to the "Genesee River Killer" Arthur Shawcross.