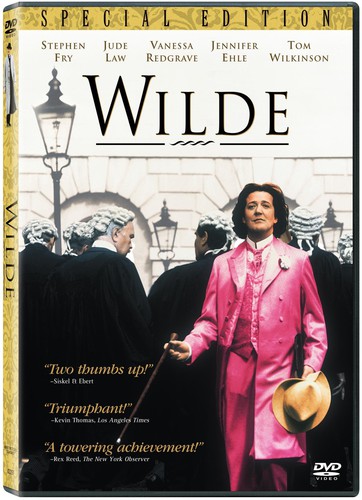 Literary genius, legendary wit, bon vivant, and gay martyr, Oscar Wilde was a man whose legend has grown to iconic proportions since his death at the beginning of the 20th century. Establishing Wilde (Stephen Fry) as a loving family man, complete with a wife (Jennifer Ehle) and two adorable sons, the film takes pains to portray him as a dignified genius who was as pained by what he considered his own sin - his homosexuality - as he was delighted by the sins of others. From his initial encounters with Robbie Ross (Michael Sheen), his first male lover, through his tragic affair with the beautiful and bratty Alfred Lord Douglas (a perfectly cast Jude Law), Wilde is seen as a conflicted fellow, warring with his own urges even as he dazzles everyone around him. SPECIAL FEATURES: Dolby Digital 2.0 - English, Additional Release Material: Audio Commentary - 1. Cast & Crew, Trailers, Featurettes - 1. STILL WILD ABOUT WILDE 2. SIMPLY WILE, Interactive Features: Interactive Menus Scene Selection, Text/Photo Galleries: Filmographies Production Notes Photo Montage, DVD-Rom Features: Complete Content of the Official WILDE Website.