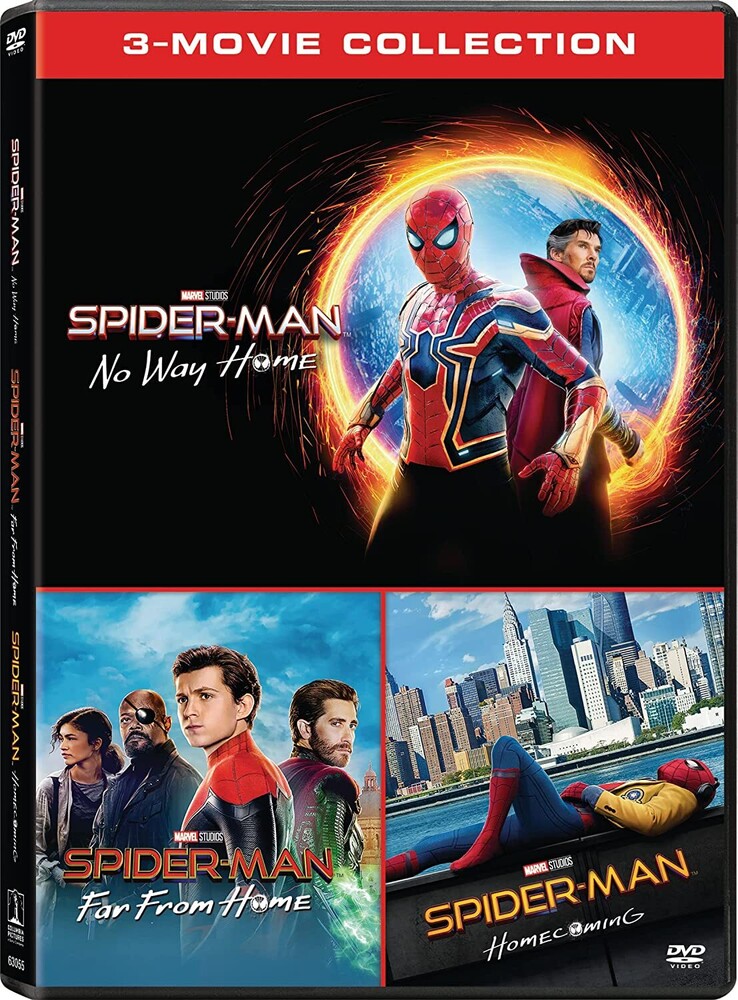 Three-disc set includes: Spider-Man: Homecoming (2017)After a stunning introduction into the Marvel Cinematic Universe in "Captain America: Civil War," the wall-crawling hero takes center stage in this spectacular solo outing. While struggling with life as a teenager, Spider-Man (Tom Holland) takes on Adrian Toomes (Michael Keaton), a former salvage company owner who uses scavenged alien tech to construct a powerful winged suit as he turns to a life of crime. With Marisa Tomei, Jon Favreau, Zendaya, and Robert Downey, Jr. As Iron Man. 133 min. C/Rtg: PG-13 Spider-Man: Far From Home (2019)A field trip to Europe with his classmates was supposed to provide Peter Parker (Tom Holland) with a well-earned respite from his superhero alter-ego of Spider-Man. But when he's recruited by superspy Nick Fury (Samuel L. Jackson), Spidey is soon back on the job and teaming up with the "Mysterio"-us Quentin Beck (Jake Gyllenhaal)-apparently a hero from an alternate universe-for a dangerous mission that may not be what it appears. Zendaya, Jon Favreau, Marisa Tomei co-star in this fun-filled Marvel sequel. 129 min. C/Rtg: PG-13 Spider-Man: No Way Home (2021)Outed as Spider-Man at the windup of "Far from Home," Peter Parker (Tom Holland) faces devastating repercussions for himself and his loved ones. Turning to Dr. Strange (Benedict Cumberbatch) for a mystic mindwipe on all who learned his identity, the consequences bring a host of alternate-reality Spider-foes like the Green Goblin (Willem Dafoe), Dr. Octopus (Alfred Molina), and Electro (Jamie Foxx) to his plane-and Pete looks to surprising allies for the cleanup. Much-anticipated Spidey saga co-stars Zendaya, Jacob Batalon, Marisa Tomei. 148 min. C/Rtg: PG-13 Widescreen; Soundtrack: English.