They Might Be Giants - Here Come the Abc's | RECORD STORE DAY 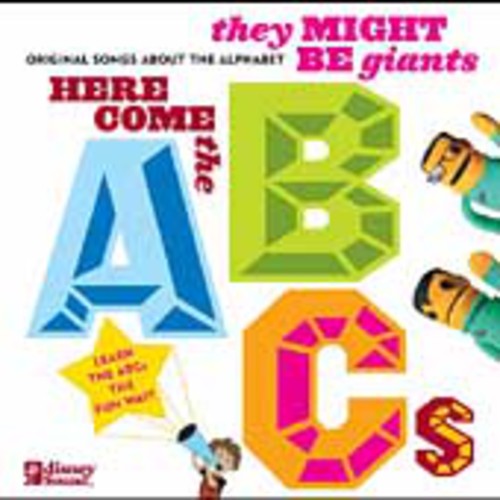 Disney Sound has partnered with Grammy Award winning alternative rock legends They Might Be Giants to bring you a new imprint for Walt Disney Records designed to create original musical works by live artists the whole family can enjoy. HERE COMES THE ABC'S guarantees success with upbeat and contagious songs that make the alphabet fun and entertaining for children and parents.

''Here Come the ABCs'' is a 2005 DVD and audio CD release by They Might Be Giants, aimed at young children learning the alphabet. The CD and DVD were originally released separately, but since have been released together as a combo.

While it was produced and released by Walt Disney Records, the band was reportedly given complete creative control over the project. As a result, the DVD features a variety of puppetry, animation and live action supplied by personal friends of the group, including AJ Schnack, who directed the TMBG documentary ''Gigantic (A Tale of Two Johns)''. For guest vocals on a few tracks, they turned to family: John Flansburgh's wife Robin Goldwasser, and John Linnell's son, Henry. The music videos that appear on the DVD were also aired (in part or whole) on the Disney Channel's children's programming block, Playhouse Disney.

''Here Come the ABCs'' was a great success for They Might Be Giants, the video being certified Gold (sales over 50,000) in 2005. The album reached #1 on Billboard’s Children’s Music charts, won

Parenting Magazine’s Children’s DVD of the Year Award and two National Parenting Publications Awards (NAAPA) . In addition, Amazon.com called it "the best Children's Music album of 2005" and the 13th best overall album of 2005. A follow-up, ''Here Come the 123s'', was released in 2008.

"Can You Find It?" was featured on the soundtrack to the movie ''Wordplay''.

While the audio-only release is considered to be They Might Be Giants eleventh studio album, some of the songs make little sense without their visual accompaniment. - Wikipedia