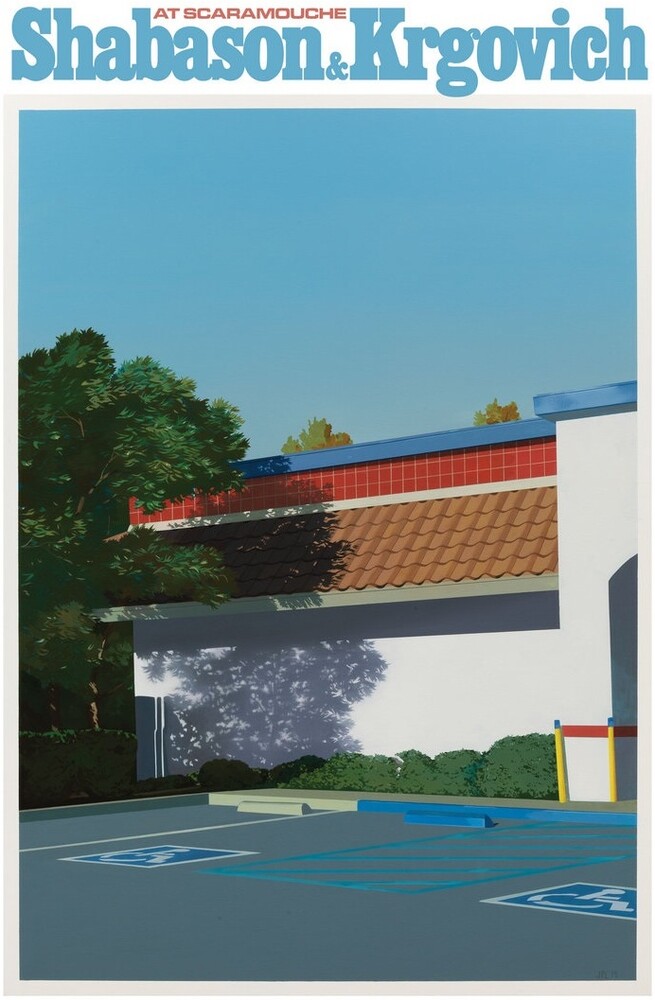 The musical partnership of Joseph Shabason and Nicholas Krgovich orbits around a shared center of earnestness, slice-of-life poeticism, and the subtle everyday banality that becomes beautiful, even absurd, under their slight redirection. Where 2020's Philadelphia placed domestic interiors under a microscope, documenting the indoor minutiae society was forced to examine mid-pandemic, At Scaramouche steps out into the sunlight squinting groggily and happily at the new day ahead- and particularly the night that follows. One evening after a recording session and some aimless ambling that included a visit to the house where the 1974 movie "Black Christmas" was filmed, Krgovich and fellow vocalist Chris A. Cummings found themselves misplaced at the Toronto restaurant from which At Scaramouche takes it's name, gawking with amusement at it's concocted air of luxury. On At Scaramouche, Krgovich and Shabason demonstrate a mutually uncanny ability to transmute this kind of cultural wariness into amused majesty, poking fun and bowing in reverence all at once. Their spotless smooth-jazz tonality, lyrical literalism, and even cover artist Jake Longstreth's humorously sober depiction of an actual old Taco Bell building all point to the duo's low-key-gonzo subversion of Adult Contemporary tropes into something unexpectedly transcendent. The first glassy keyboard hits of "Soli" indicate this sentiment before Krgovich even steps forward as the album's host, and when he does, he immediately gets to work setting the scene of a weary parking lot stroll on a cool, street-lit evening after work- just one of so many unremarkable moments that become utopic under Krgovich's poetic care. Where the duo's previous effort Philadelphia would've camped permanently in the stillness, At Scaramouche lunges into the upbeat stroller "In the Middle of the Day". Though no less exemplary of the album's quiet everyday magic, it sets a brisker pace with it's head-nodding drum break and coolly interjecting bassline. Other moments on the album reiterate the spryness, like the nearly-erratic "Soli II", and the lively pop centrepiece "I Am So Happy With My Little Dog". On the latter, Krgovich leads a tight-knit ensemble that comes as close to krautrock here as they ever might, where a driving drumbeat politely urges the elements forward; trumpet harmonies, chanting vocals, and bubbling synths, all crowned by a chorus-laden, perfectly askew solo from guitarist Thom Gill. Like so much that Shabason & Krgovich put their fingerprints on, At Scaramouche presents a familiar palette with just enough inflected weirdness to prompt double takes, turning folk art into outsider art with an almost imperceptible sleight of hand. Genre: Alternative / Indie