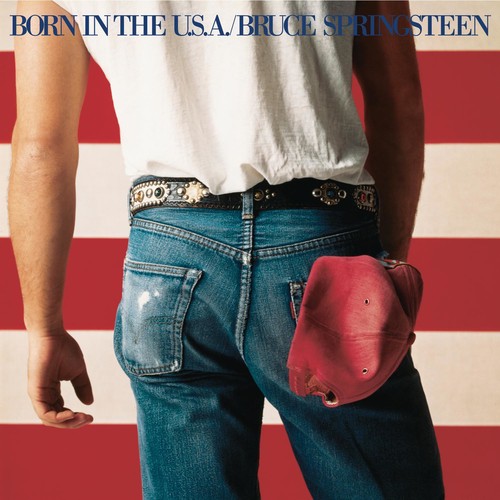 1984 album from the New Jersey rocker, the blockbuster album that made him a bona-fide international superstar. The album yielded an amazing seven Top 10 singles: 'Born in the U.S.A.', 'Cover Me', 'I'm on Fire', 'I'm Goin' Down', 'Glory Days', 'Dancing in the Dark' and 'My Hometown'.

''Born in the U.S.A.'' is the seventh studio album by American rock singer-songwriter Bruce Springsteen, released on June 4, 1984. A popular and commercial triumph, it found Springsteen marking a departure in his sound. While the predecessor, the dark and acoustic ''Nebraska'' featured songs of pessimism and isolation, ''Born in the U.S.A.s lyrics expressed signs of hope in the daily fight of the standard American in following the American Dream, a new feeling complemented by synthesized arrangements and a pop-flavored, radio-oriented sound that helped Springsteen to extend his popularity and appeal to mainstream audiences. The album was supported by an enormous commercial campaign that helped create several hit singles, as well as remixes and music videos.

''Born in the U.S.A.'' was the best-selling album of 1985 in the United States (and also Springsteen's most successful album ever). The album produced a record-tying string of seven Top 10 singles (the most for an album in history tied with Michael Jackson's ''Thriller'' and Janet Jackson's ''Rhythm Nation 1814'') and also a worldwide concert tour (the two-year ''Born in the U.S.A. Tour'') that was a success. Apart from this hype, the album was lauded by most critics and is often considered Springsteen's magnum opus along with his 1975 breakthrough, ''Born to Run''. The title track is often misinterpreted as a patriotic anthem. Its cover (a close-up of Springsteen's rear in front of an American flag, as he was photographed by Annie Leibovitz) became quite recognizable in its day. - Wikipedia