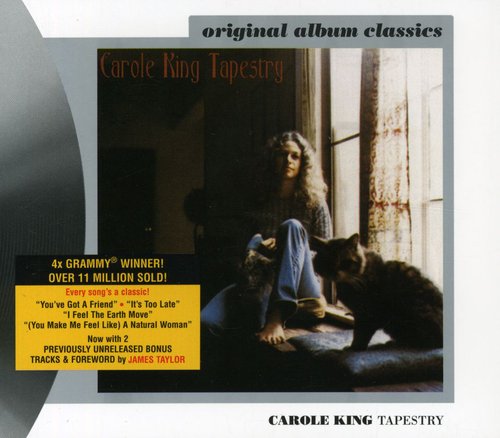 Certified 11X platinum, this groundbreaking pop masterpiece smashed all existing sales records upon its 1971 release and continues to sell more than 20,000 units a month after almost 30 years! Tapestry was #1 for 15 weeks and earned 4 Grammys. Now this essential classic LP returns, newly mastered with 2 unreleased bonus cuts ("Out in the Cold" and "Smackwater Jack" - live). The expanded edition booklet sports unpublished photos and memorabilia, original artwork and lyrics.

''Tapestry'' is a pop album by singer-songwriter Carole King, released in 1971. It features minimal production by Lou Adler. ''Tapestry'' was ranked US number 1 for 15 consecutive weeks, which is the longest time for an album by a female to occupy that position, and remained on the ''Billboard'' 200 for 305 weeks, the most recent week being the ''Billboard'' magazine issue dated July 17, 2010. In terms of time on the charts, it ranks fifth overall and in terms of length on the charts for solo musical acts it ranks second. It remains the longest charting album by a female solo artist. ''Tapestry'' has sold over 25 million copies worldwide and on July 17, 1995 was certified diamond in the United States by the RIAA for 10 million copies sold in the US. In 1972 the album also garnered four Grammy Awards including Album of the Year, Best Female Pop Vocal Performance, Record of the Year ("It's Too Late"), and Song of the Year ("You've Got a Friend"). Three songs from the album, "I Feel The Earth Move", "It's Too Late", and "You've Got A Friend", all reached #1 on the Billboard Hot 100 after ''Tapestrys release. Altogether, four songs on the album were at one point #1 hits, all of which were written or co-written by King.

Critic Robert Christgau wrote in ''Christgau's Record Guide'' (1981): King wrote or co-wrote all of the songs on the album, several of which had already been hits for other artists such as Aretha Franklin's "(You Make Me Feel Like) A Natural Woman" and The Shirelles' "Will You Love Me Tomorrow". Three songs were co-written with King's ex-husband Gerry Goffin. James Taylor, who encouraged King to sing her own songs, and who also played on ''Tapestry'', would have a #1 hit with "You've Got a Friend." Two songs were co-written with Toni Stern: "It's Too Late" and "Where You Lead".

In 2003, the album was ranked number 36 on ''Rolling Stone'' magazine's list of the 500 greatest albums of all time. In 2001, the VH1 TV network named ''Tapestry'' the 39th greatest album ever. In 2003, it was one of 50 recordings chosen by the Library of Congress to be added to the National Recording Registry.

Various artists combined to re-record all the original tracks for more than one tribute album; the first, released in 1995, entitled ''Tapestry Revisited: A Tribute to Carole King'', which was certified gold, and the second, released in 2003, entitled ''A New Tapestry — Carole King Tribute''. - Wikipedia