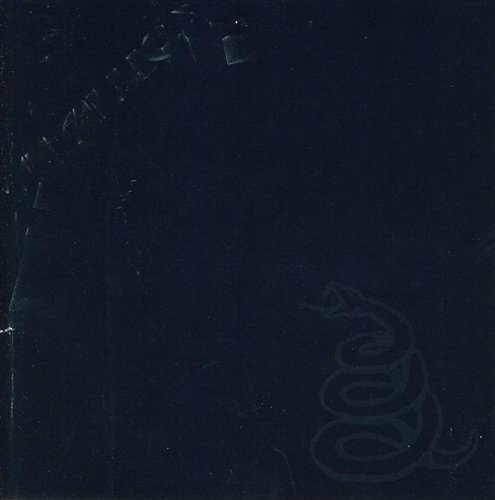 Longtime fans may call this one a sellout but that is hardly the case. Instead, the group has increased the bottom end of their sound and keeps the riff-per-song limit down to about two. This may keep Metallica from alienating staunch metal-haters, but it is the quality of the songs - hits such as Enter Sandman and the ballad Nothing Else Matters, but also Holier Than Thou - that has made this their most successful (and best) album to date. Certified at 12 million units by the RIAA. (2/01)

''Metallica'' (also known as ''The Black Album'') is the eponymous fifth studio album by the American heavy metal band Metallica. It was released on August 13, 1991 through Elektra Records. The album features songs that are considered today among Metallica's most well-known songs, with songs such as "Enter Sandman", "The Unforgiven", "Nothing Else Matters", "Wherever I May Roam" and "Sad but True".

It spent four consecutive weeks at number one on ''Billboard 200''. ''Metallica'' is the band's best-selling album to date, with over 15 million copies sold in the United States. It is the best-selling album of the SoundScan era. The album was certified 15x Platinum (Diamond) by the RIAA on November 13, 2009. - Wikipedia