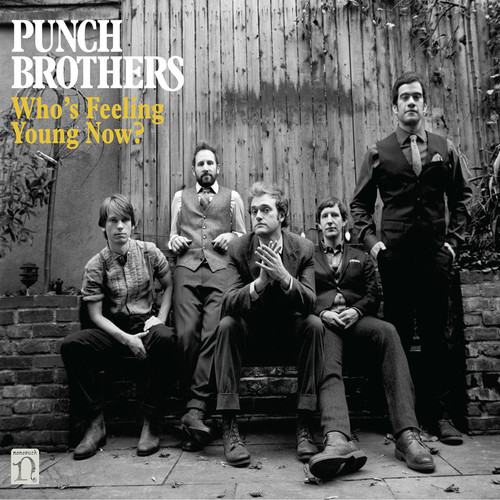 The title of the third Punch Brothers disc for Nonesuch, borrowed from one of their new songs, is more an exhortation than a taunt. Who s Feeling Young Now?, produced and engineered by Jacquire King, contains some of the most exhilaratingly direct, sonically daring performances the group has ever recorded.

As the five members, ranging in age from their mid-20s to early 30s, have matured together on the road and in the studio, their approach to writing and performing has, conversely, become looser, simpler, and, in a sense, more unaffectedly youthful. In fact, the title song featuring rumbling bass, skittering violin, and wailing multi-tracked vocals sounds like hard-charging string-band punk rock. Opening track Movement and Location feels like Steve Reich inspired indie rock, with rhythmically pulsing guitar, bass, and banjo lines and the same flying-by-the-seat-of-the-pants spirit. It came together over a matter of minutes in mandolinist/singer Chris Thile s living room. At this point, virtuosity is a given among these already prodigious players; the operative word for Who s Feeling Young Now? is camaraderie.

I think we re a lot more comfortable now playing to our strengths and our bluegrass roots, says guitarist Chris Eldridge. We kind of came around to a place where that was something we were just as willing to present to the world it s obviously part of who we are, always has been but I feel we ve been a little reticent, as if playing a simple bluegrass song wasn t enough. We ve gotten a lot more comfortable in our skin.

In 2006, former Nickel Creek member Thile instigated the collaboration that evolved into Punch Brothers when he recruited Eldridge, banjo player Noam Pikelny, and violinist Gabe Witcher to back him on a solo album, How to Grow a Woman; bassist Paul Kowert joined the band three years later. They officially became Punch Brothers, releasing a debut album, Punch, on Nonesuch in 2008. Since then, says Thile, Punch Brothers has gradually evolved from a band that existed to present the ideas of one guy into a band presenting the unified idea of five guys. I had a very clear vision for The Blind Leaving the Blind and I m very proud how that turned out, but the reason to put yourself in this kind of situation is to have the opportunity to present a real sense of community to other people. When there are five dudes up there doing something as a unit that encourages people to participate, that s where Punch Brothers is exhibiting a lot of growth. We can actually bring a sense of real musical camaraderie, creative camaraderie, to people who come to our shows and those who listen to the records.