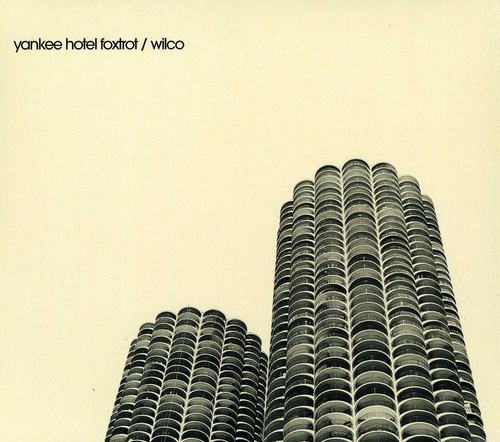 Yankee Hotel Foxtrot is without question Wilco's most talked about release to date. Produced by the band, and mixed by Jim O'Rouke (Sonic Youth, Gast rdel Sol), Yankee Foxtrot sees the Chicago-based band stretching their creative borders once again.

The new Wilco came by express mail just as I was bundling my 7-year-old daughterup for her tutoring session, so I jammed it in her folder to give it a listenin the car on our short ride. She listened intently to the first track, a squallingsonic collage that veers back and forth between songcraft and studio gadgetry,and then asked me for the name of the song. I grabbed the sleeve and told her,"It's called, ‘I Am Trying to Break Your Heart.'" Shelooked at me for a moment and said quietly, "Why would anyone want to dothat?"

I suspect that the answer to that question just might clear up a lot of mysterysurrounding the motivations, both musical and emotional, of Jeff Tweedy. Fromthe very beginnings of Wilco's existence, Tweedy has sought to distancehimself by degrees from not only his past musical affiliations but from hisAmericana peer group as well. That approach culminated in 1999's brilliantand widely misunderstood Summerteeth, an evocation of roots pop as prismedthrough Jimmy Webb and Pet Sounds.

Tweedy's path of generating more questions than answers continues on theastonishing Yankee Hotel Foxtrot, an album so deliberately steeped inthe madness of its creation that it earned Wilco its walking papers from Repriseand may well have caused the defections of guitarist Jay Bennett and drummerKen Coomer. And even though much of Yankee Hotel Foxtrot is bathed in a swirlingsonic miasma of mellotron atmosphere and noise ambiance that recalls everythingfrom Tom Waits' deconstructionist experiments to any number of recent spacerock entries, the album remains accessible through the chaos, mainly becauseof the muted joy that subtly underlies everything here.

Yankee Hotel Foxtrot is a clear extension of Summerteeth, its popbrasher and its willingness to test the edges more apparent. From the openingcalamity of "I Am Trying to Break Your Heart" to the breezy Americanapop of "Kamera" to the ‘60s pop/noir wave of "Heavy MetalDrummer," Tweedy seems intent on offering a stylish and assured résuméof everything he and Wilco are capable of accomplishing. Just as amazing isTweedy's songwriting prescience in penning songs two years ago that soeerily speak to the state of the world today ("War on War," "Ashesof American Flags"). If Yankee Hotel Foxtrot isn't Jeff Tweedy'smasterpiece, the potential for the next Wilco album is frightening in the bestpossible way.