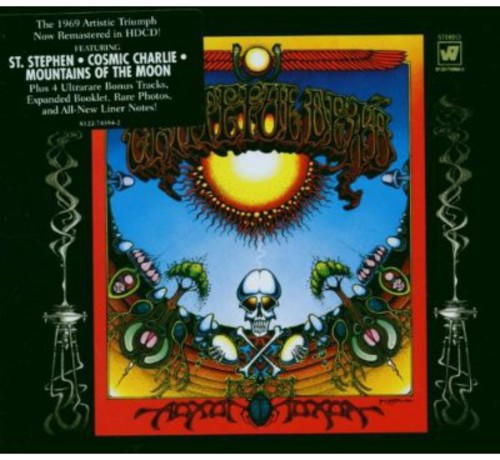 The Grateful Dead's Aoxomoxoa has been remastered and expanded. It now features 4 rarities and a stirring live "Cosmic Charlie."

''Aoxomoxoa'' is the third studio album by the Grateful Dead. It was originally titled ''Earthquake Country.'' Many Deadheads consider this era of the Dead to be the experimental apex of the band's history. It is also the first album with Tom Constanten as an official member of the band. ''Rolling Stone'', upon reviewing the album, mentioned that "no other music sustains a lifestyle so delicate and loving and lifelike." The album was certified gold by the RIAA on May 13, 1997.

The title of the album is a palindrome created by cover artist Rick Griffin and lyricist Robert Hunter. According to the audio version of the Rock Scully memoir, ''Living with the Dead'' (read by the author and former Dead co-manager himself), the title is pronounced "OX-OH-MOX-OH-AH". The words "GRATEFUL DEAD" on the front of the album, written in large, flowing capital letters, can also be read "WE ATE THE ACID". The artwork around the bottom edge of the album cover depicts several phallic representations.

In 1991 ''Rolling Stone'' selected ''Aoxomoxoa'' as having the eighth best album cover of all time. A five-year-old Courtney Love appears on the album's back cover. - Wikipedia