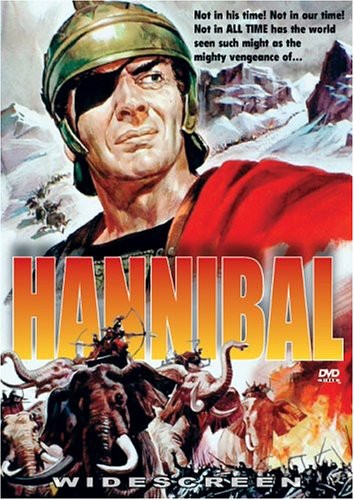 VCI is very pleased to present this epic motion picture, which has been mastered from the original negatives and presented in all it's widescreen glory for the first time on home video! Love and war intertwine in this fanciful adaptation of history. The brilliant Carthaginian general, Hannibal (Victor Mature) despises Rome. Fueled by vengeance, he drives his army of elephants through the treacherous, frozen Alps into Italy, crushing anyone who dared to oppose him. As a strategy to break the morale of his enemies, Hannibal captures the beautiful Sylvia of Rome (Rita Gam) so she may see the might of his army and spread the news of impending doom to her people. However, a love grows between the two that will eventually be his undoing. This big-budget spectacle produced by Warner Bros. Was shot in Technicolor and SuperCinescope and literally features a cast of thousands... over 4,000 foot-soldiers, 1,500 horsemen, 45 elephants and a vast assortment of war machines were employed in the historic battle of Cannae alone.