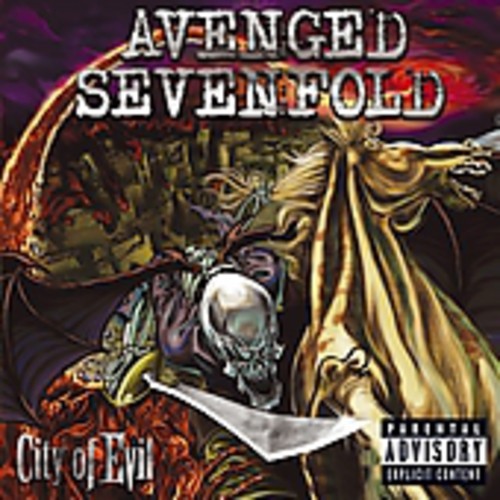 Fusing punk with melody, metal intensity with an adventurous spirit, the drama and darkness of Avenged Sevenfold moves effortlessly from their powerful vocal punch to thick cascading melodies, from loud and fast to epic.

''City of Evil'' is the third studio album and first major label release by American metal band Avenged Sevenfold. The album was released on June 7, 2005 under the Warner Bros. Records label. Produced by Scott Gilman, ''City of Evil'' contains a more hard rock sound than Avenged Sevenfold's previous two albums, which had been classified into the metalcore genre. The album is also notable for the absence of screaming vocals. M. Shadows worked with vocal coach Ron Anderson, whose clients have included Axl Rose and Chris Cornell, for months before the album's release to achieve a sound that had "grit while still having the tone".

The album contains some of Avenged Sevenfold's most popular and famous songs, including "Bat Country", "Beast and the Harlot", "Burn it Down", and "Seize the Day". All four of these songs were released as singles between June 2005 and July 2006. ''City of Evil'' was very successful after its release, debuting at #30 on the Billboard Top 200 chart. The album was certified as a platinum record by the Recording Industry Association of America in August 2009, and has gone onto sell over 1,500,000 copies in the United States, and 2,500,000 total worldwide. As of 2010, it remains the best-selling out of Avenged Sevenfold's discography. It is also their longest studio album tracking at over seventy-two minutes.

Three of the songs off of the album, "Bat Country", "Beast and the Harlot" and "Seize the Day", were also released as music videos. Directors for these videos included Marc Klasfeld, Tony Petrossian, and Wayne Isham, respectively.

To date ''City of Evil'' has been widely acclaimed and in 2006, the album was placed number 63 on Guitar World magazine's list of the 100 greatest guitar albums of all time. - Wikipedia