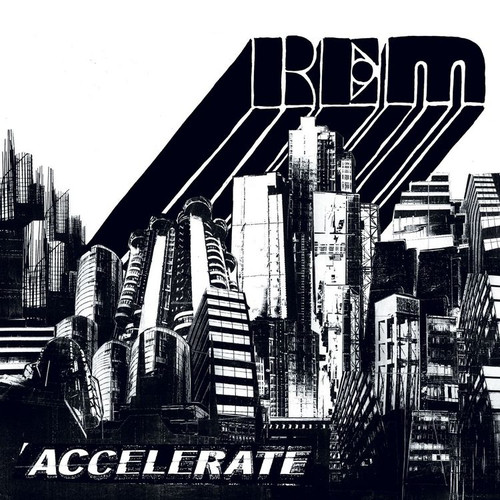 R.E.M.'s first studio album in four years, Accelerate, finds modern rock's most acclaimed band returning to the stripped down, guitar-driven power that first enraptured fans. Helmed by the band and, for the first time, Jacknife Lee (co-producer of U2's How To Dismantle An Atomic Bomb, The Hives and Snow Patrol), Accelerate puts the group once again firmly behind the wheel of alternative rock.

It seems like we haven't heard much from R.E.M. this decade, even though they've been cranking out records at their standard one-every-three-years pace'"2001 gave us the gold Reveal and 2004 offered the less successful Around the Sun. It's hard to comprehend their slow fall from grace; contemporaries U2 are still massive and the Athens trio had a sick run of six platinum-plus records up to drummer Bill Berry's departure in 1997. Maybe it's the fact that Michael Stipe and company spent those last two discs crafting sun-dappled, sleepy pop while the charts continued to champion bulldog belligerence. Well, word is that Accelerate is truth in advertising, an arena-sized rock album along the lines of past hits Monster and Automatic for the People. First single "Supernatural Superserious" sets an up-tempo tone and the band seems rejuvenated. Looking forward to seeing them back at the top of the (eye) charts.