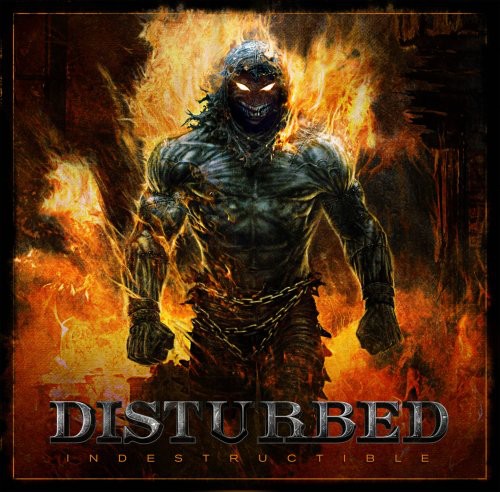 Nearly a decade after the release of their groundbreaking debut The Sickness, Disturbed have become one of the most respected bands in the hard rock universe thanks not only to pummeling riffs and jackhammer beats but passionate insights into our troubled times. Three platinum-plus albums have led to Indestructible, the group's darkest, angriest outing yet.

"Down With the Sickness" is simultaneously Disturbed's most famous and infamous song. Say what you will about David Draiman's machine-gunned (and surprisingly hard to imitate) "OOOOH-WAA-AH-AH-OW"'"the chrome-domed frontman's signature bark has allowed the Chicago quartet to transcend the vast, desolate nu-metal valley, emerging on the other side as a perfectly respectable mainstream metal band. Indestructible is Disturbed's fourth full-length and finds their momentum intact after Ten Thousand Fists' surprise hit cover of Genesis staple "Land of Confusion." New single "Perfect Insanity" works their tried-and-true formula well: an overdriven down-tuned verse riff blooms into an undeniable fist-pumping chorus, giving Draiman's operatic rasp plenty of room to soar above the relentless chugging. Better news: Guitarist Dan Donegan is distinguishing himself from his less inspired peers, unleashing memorable, blazing solos on the last few records. Look for the boys this summer as headliners on the brand-new Rockstar Mayhem Energy Festival, which should allow us all to get our mosh on in Ozzfest's (presumed) absence.