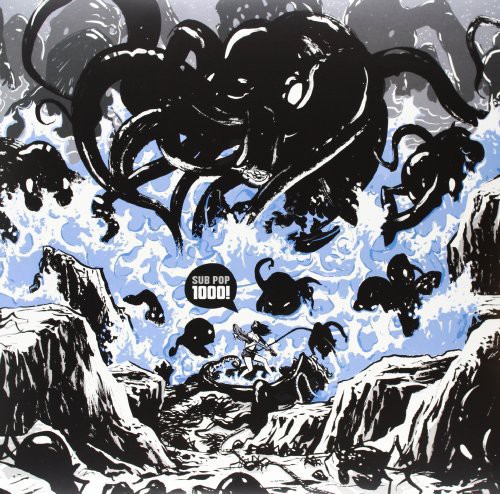 Physically exclusive to RSD  on the day, then available from subpop.com

On the occasion of Sub Pop's 25th Anniversary, Sub Pop presents a limited-edition compilation  of what we feel are some of the most vital, cutting-edge artists from around the world. Sub Pop 1000 was inspired by Sub Pop 100, the label's landmark 1986 compilation LP, which championed then-emerging artists such as Sonic Youth, Wipers and The U-Men. Sub Pop 1000 is pressed on silver vinyl and limited to 5,000 copies worldwide. All tracks are unreleased and exclusive, and the LP includes an 11"x11" booklet and a MP3 download coupon. Cover art by Nathan Fox."Side A
His Electro Blue Voice – Kidult
Chancha Via Circuito – Lacandona
Protomartyr – French Poet
Lori Goldston – Tangled North
Iron Lung – A Victory For Polio