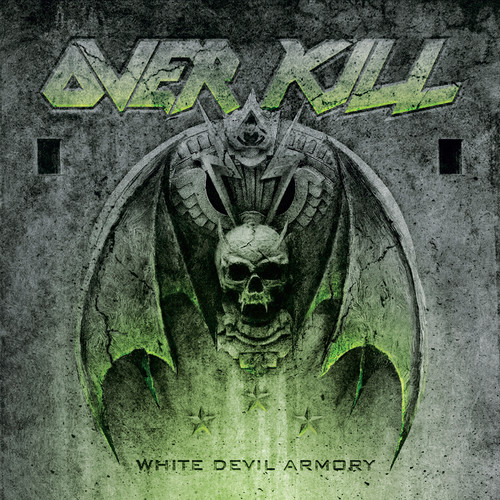 Nobody opens their favorite beer and wonders what it will taste like. Experimentation, stylistic departures, overtures toward the mainstream? That's somebody else's game. In a time before MTV's abysmal Jersey Shore or HBO's magnificent The Sopranos, New Jersey blessed the world with Overkill. A heavy metal institution established at the forefront of the burgeoning American thrash movement, with one boot in the gutter and one fist railing against the polish of lesser pretenders.

This year s White Devil Armory is as vital, powerful, aggressive and melodic as any of the albums in Overkill s ridiculously impressive back catalog, which stretches over 16 slabs of genre defining and redefining molten metal. The crunch is unmistakable. The voice is irreplaceable. Get less than a minute into White Devil Armory and it s clear it s Overkill. No pretense, no musical red herrings. This is tried and true, always trusted thrash metal.

New Overkill bangers like thrastastic album opener, Armorist, the punkish Pig and the signature-sound powered Bitter Pill pack as hard a punch as ever. White Devil Armory is focused, destructive and catchy as hell, demonstrating the full capacity of a group whose creative work ethic is evident as the new songs blast from the speakers. White Devil Armory continues the blue-collar band s modern tradition of self-production, with mixing by The Electric Age s Greg Reely; whose work includes Fear Factory, and Devin Townsend.

Nearly as ubiquitous at a metal show as Eddie, Snaggletooth or Vic Rattlehead, the batwinged-skull known simply as Chaly has adorned the backs of many denim vests around the world. And chances are, anybody with Overkill s mascot on their jacket will proudly display the logos of the Big 4 on their person, as well.

White Devil Armory represents a sonic high watermark and a stylistic crown resting atop the Overkill s surging modern chapter, which sees the band continuing to tour for a worldwide crowd as they have for over 30 years alongside bands like Slayer, Motorhead and Megadeth.