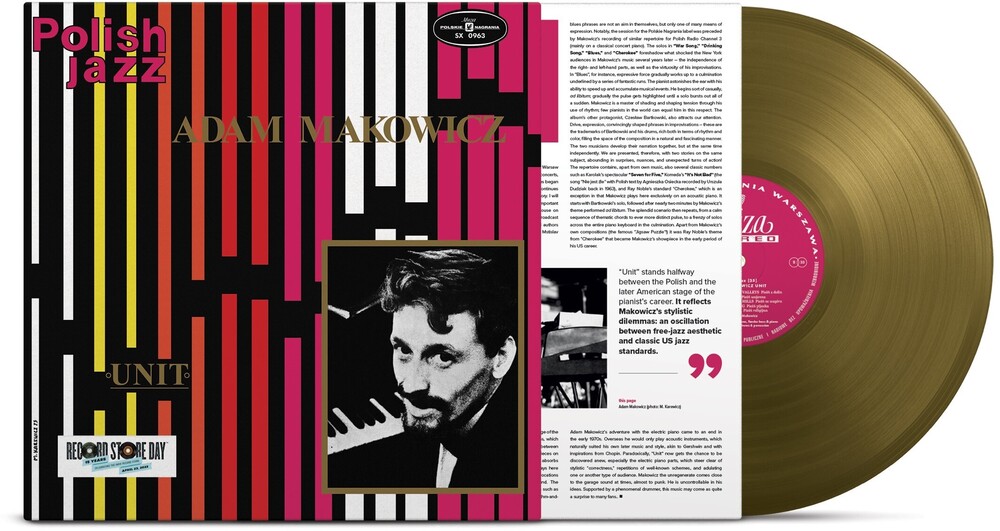 Limited edition of Adam Makowicz's album 'Unit' featuring a fantastic Polish drummer - Czeslaw Bartkowski. The album was pressed on a golden, 180-gram vinyl, for the Record Store Day. 'Unit' was released in 1973 (vol. 35) under the Polish Jazz series label, and was a significant step in the artist's career. It was one of the first fusion albums in Poland and, more interestingly, created in a chamber-style duet. Makowicz and Bartkowski used very few instruments, so they gave their all to fill the space. Undoubtedly, they mastered it by showing their virtuosity. Makowicz gradually builds and shapes tension through rhythm, and there are only few pianists that are capable of that. Bartkowski's style is also very characteristic thanks to his drive, his expression, and those convincing tied notes in his improvisations. The sound of his drums is rich in rhythm and colour and fills the space of time naturally. Both musicians drive a narrative together but independently at the same time. Two interpretations of the same story, full of surprises, nuances, and unexpected twists and turns. In the repertoire, besides their own compositions, they presented a few classics, such as impressive 'Seven for Five' by Karolak, Komeda's 'It's not bad' and Ray Noble's standard 'Cherokee'. Paradoxically, 'Unit' has a unique chance to be rediscovered by the listeners again! Only 300 copies, solid gold 180g LP, single sleeve