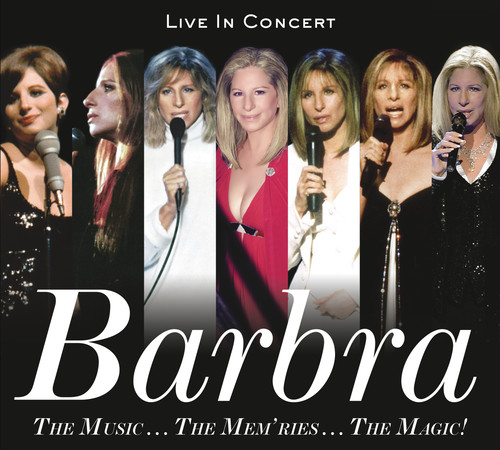 The Music...The Mem'ries...The Magic! is the album of record for Barbra Streisand s triumphant concert tour of the same name in 2016. This collection captures the iconic songstress culminating her 13 city tour in Miami, Florida on December 5th, 2016. The Music...The Mem'ries...The Magic! is available in two versions: a single disc album of concert highlights, and a deluxe 2 disc set featuring the entire concert performance and all of Barbra's dialogue including her reflections on making some of this music, her film career, and what it was like to make her most recent # 1 album, ENCORE Movie Partners Sing Broadway (with Alec Baldwin, Chris Pine, Jamie Foxx, Antonio Banderas, Anne Hathaway, Hugh Jackman, Patrick Wilson, Melissa McCarthy, Daisy Ridley). Both versions of this album are also available digitally. This career spanning collection also includes a performance of "Climb Ev'ry Mountain" with special guest, Jamie Foxx.

The Music...The Mem'ries...The Magic! tour reviews were consistently stunning. The New York Times wrote that Barbra "continues to make the finale of "Don't Rain on My Parade sound like a space shuttle leaving Earth." The Miami Herald raved, "Streisand phrases masterfully. She instinctively knows just when to place emphasis on a portion of a song so she can still achieve the stratospheric money note. When she sang softly, her pristine vibrato melted sustained lines seamlessly one into the other, stitching notes like a master tailor on a solo "You Don t Bring Me Flowers" or on Stephen Sondheim's "Losing My Mind." The Baltimore Sun lauded, "Considering how superbly Streisand sounded, she could have owned the place singing the alphabet. Few pop vocalists achieve that consistency, let alone back up the vocal steadiness with so much interpretive power."

This collection impresses from the moment she begins to sing, and is a must for every Barbra Streisand fan. The release of The Music...The Mem'ries...The Magic! album accompanies the airing of the filmed version of this concert, that premiered on Netflix on Wednesday, November 22nd, 2017.

Barbra Streisand is the only recording artist in history to achieve a # 1 Album in six consecutive decades. She has recorded 52 gold, 31 platinum and 13 multi-platinum albums in her career. She is the only woman to make the All-Time Top 10 Best Selling Artists list. Streisand has had 34 albums make the Top 10 on the US charts. She is the only female artist to have achieved this milestone, tying her with Frank Sinatra. Streisand is the female artist with the most number one albums in Billboard's history. Streisand has attained unprecedented achievements as a recording artist, actor, concert performer, producer, director, author and songwriter. She has been awarded two Oscars, five Emmys, ten Gold Globes and eight Grammys.