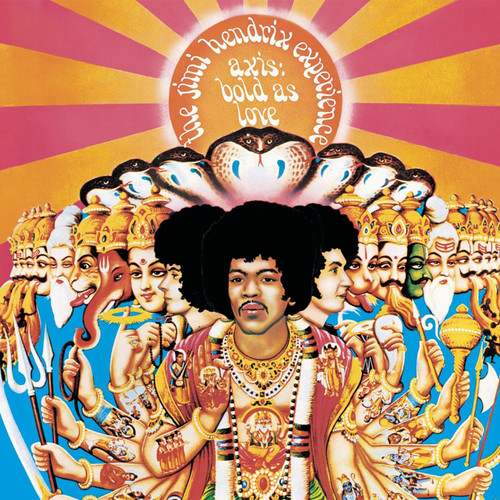 Axis: Bold As Love on Hybrid SACD from Analogue Productions! Newly remastered by Bernie Grundman, from the original analog master tapes! Includes both mono and stereo mixes — Pure DSD sound! Analogue Productions presents the SACDs Jimi Hendrix fans have asked for: Hybrid SACDs of both Axis: Bold As Love, as well as Are You Experienced, the 1967 debut full-length studio release by the Jimi Hendrix Experience. Newly remastered by Bernie Grundman from the original analog master tapes, each disc contains the mono and stereo mixes for each of these historic albums. This is pure DSD sound to applaud! Axis: Bold As Love, the sensational sophomore release of the Jimi Hendrix Experience, showcased Hendrix's expansive experimentation while acknowledging his early R&B and soul music influences. The album features classics such as "Spanish Castle Magic," "Little Wing," "Castles Made Of Sand," and "If 6 Was 9." As Rolling Stone states, Jimi Hendrix was the most innovative instrumental genius the rock era produced, a wizard guitar player whose sense of technique never overwhelmed the blues and rock 'n' roll spirit that was the underpinning of his genius. He improvised with the fervor of a born jazzman; he philosophized like the most cosmic rocker, but ultimately his basics were rooted in soul, a reflection of the chitlin circuit, where he cut his teeth. With the possible exception of Cream, The Jimi Hendrix Experience was debatably the world's finest-ever power trio. Axis was a showcase for Jimi's brash, scintillating songs and the grasp that Jimi and his cohorts — Mitch Mitchell on drums and Noel Redding on bass — had on the studio technology at their disposal, and the lyrical beauty of Hendrix's guitar playing. • "The most lasting song for many is the awe-inspiring 'Little Wing.' With its perfect blend of lead and rhythm guitar (the song's introductory phrases blurred the line forever between the two), the tune is a pure, simple thing of beauty ... In true 1967 style, the production on Axis is superb. Jimi never sounded as vulnerable and accessible, vocally and instrumentally, while the analog thud of Mitch Mitchell and the solid basslines of Redding were the ultimate rhythm section of the day - with a nod, of course, to Jack Bruce and Ginger Baker, their only rivals in so many respects." — 1001 Albums You Must Hear Before You Die • "(Axis) followed up Hendrix's groundbreaking debut effort with a solid collection of great tunes and great interactive playing between himself, Noel Redding, Mitch Mitchell, and the recording studio itself. Wisely retaining manager Chas Chandler to produce the album and Eddie Kramer as engineer, Hendrix stretched further musically than the first album, but even more so as a songwriter. He was still quite capable of coming up with spacy rockers like 'You Got Me Floating,' 'Up from the Skies,' and 'Little Miss Lover,' radio-ready to follow on the commercial heels of 'Foxey Lady' and 'Purple Haze.' But the beautiful, wistful ballads 'Little Wing,' 'Castles Made of Sand,' 'One Rainy Wish,' and the title track set closer show remarkable growth and depth as a tunesmith, harnessing Curtis Mayfield soul guitar to Dylanesque lyrical imagery and Fuzz Face hyperactivity to produce yet another side to his grand psychedelic musical vision." — AllMusic Bottom line, January of 1968 brought Axis: Bold As Love to the U.S., an album that expanded Jimi's six-string flame with celestial clarity, and also brought his rapidly evolving songwriting gift to the fore.