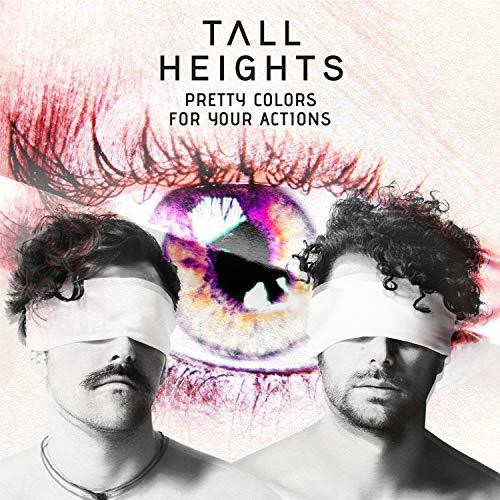 The new album from Boston band Tall Heights, Pretty Colors For Your Actions, finds the duo, Paul Wright (cello and vocals) and Tim Harrington (guitars and vocals), exploring a range of musical influences and emotions. The album, co-produced by Oliver Hill and Steve Wall (both of whom worked on Tall Heights 2016 album Neptune), is underpinned by the duo's signature melodies, layered and shaped with live instrumentations and contemporary production to create the sonic universe that is Pretty Colors For Your Actions. The songs range from hard-hitting ballads ("House on Fire" and "Not Like It Was") to hook-laden, synth-heavy numbers ("Oslo" and "White Frost") to sprawling jams ("Over Now") and philosophical trips ("Roanoke"). The lead single from the album, "The Deep End," is both buoyant and upbeat, yet clouded by a feeling of darkness, a conflict of emotions further explored in "Midnight Oil," from which the album's title is taken. The highly-anticipated release of Pretty Colors For Your Actions is just the start of a huge fall for the group, who will then take their newly-released music across North America for 30+ headlining tour dates beginning this October. The energy, focus and inspiration that Tall Heights are harnessing in 2018 feels like a rebirth. Having amassed over 120 million streams, the duo are currently on their biggest winning streak, touring the US and Europe alongside acts like Ben Folds, CAKE, Judah & the Lion and Colony House, and racking up accolades across the press world from the likes of Paste, SPIN, Huffington Post, NPR and Stereogum, in addition to making their broadcast performance debut on Conan.