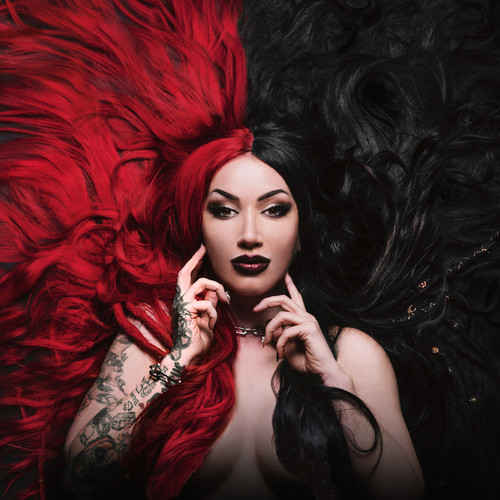 Appropriately enough for a band named NEW YEARS DAY, their stunning new "Unbreakable" album signifies a new outlook-as well as a high-water mark for the Cali-bred lineup. Yet it was a rocky road to "Unbreakable", as singer Ash Costello explains: "If I had to look at my life like a timeline of colors, when I wrote our last album, 'Malevolence' (2015), it was pitch, charcoal black. But in the last couple years, the band cut off toxic people, built a new business team, and we're stronger than we've ever been. So when we went to make 'Unbreakable', I wanted the process to be fun, to reflect our renewed vibe and energy," she says. "We set out to write the poppiest metal album, or the most metal pop album."On "Unbreakable", that mission is accomplished. It's a dozen intense, boundary-melding songs that may touch on metal or goth, but are ultimately undeniable modern rock 'n' roll tunes, no-holds-barred, done the NEW YEARS DAY way. The public got its first taste of "Unbreakable" in November 2018, with the booming, ultra-dynamic "Skeletons." The song surpassed 1 million worldwide streams, the first proof that "Unbreakable" was going to be unbeatable. It's an album that captures a young band in its creative prime, and a singer solidly in charge of her vision. The album was produced by Mitch Marlow (All That Remains, In This Moment) and Scott Stevens (Halestorm, Shinedown) and showcases a NEW YEARS DAY stripped bare-literally. The "boys in the band" left behind their white face makeup, which all admit was somewhat of a "safety blanket." Likewise, Costello stripped down her songwriting. "I used to think lyrics needed to have metaphorical veils and be super-dense and paint a picture but leave it up to the interpretation." But for "Unbreakable", she says with characteristic forthrightness: "I was, 'fuck that, I'm literally going to say exactly what I want to say."With the upcoming release and the solid new line-up the members of NEW YEARS DAY finally feel "Unbreakable."