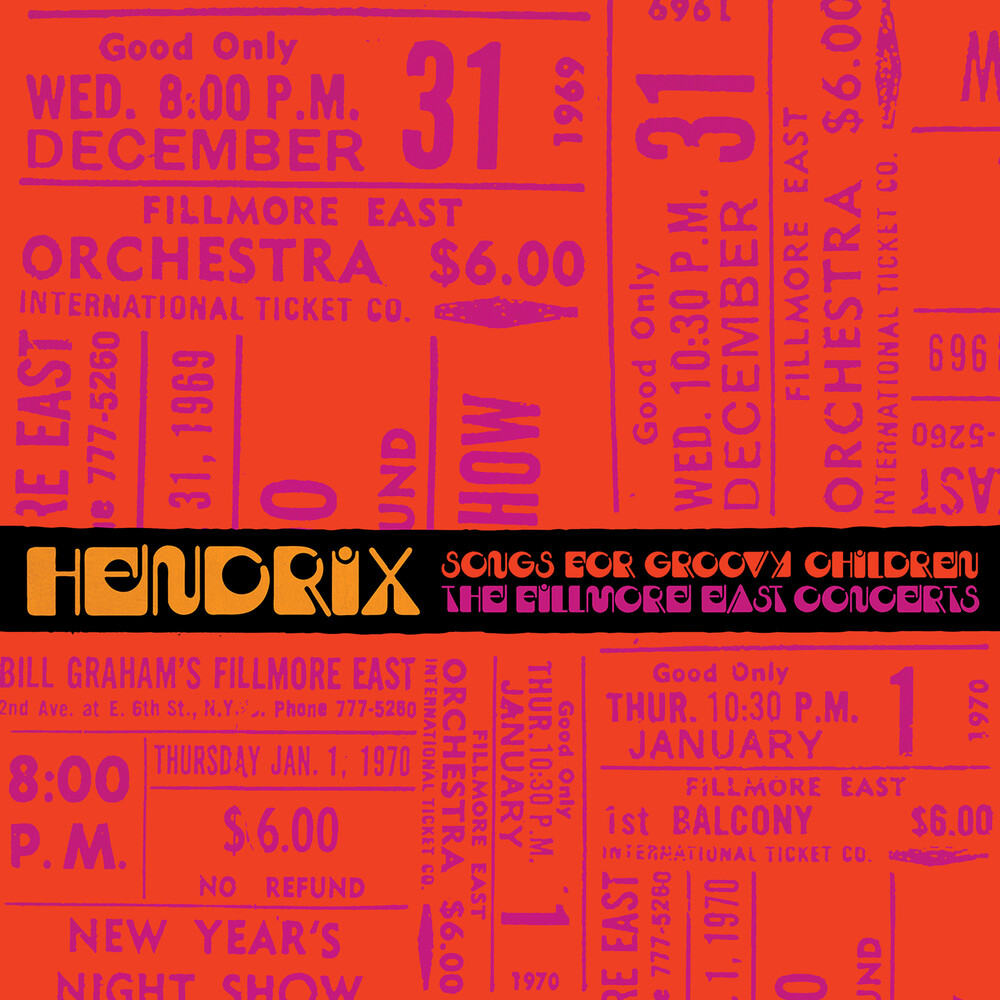 Songs For Groovy Children assembles all four historic debut concerts by Jimi Hendrix’s newly assembled Band of Gypsys at New York’s Fillmore East on New Years Eve 1969 and New Years Day 1970. Presented in their original performance sequence and encompassing 43 tracks across 5 CDs or 8LPs, the set boasts over two dozen tracks that have either never before been released commercially or have been newly remixed plus the full extended versions of songs originally released on the 1970 Band of Gypsys album. Measured alongside his triumphs at Monterey Pop and Woodstock, Hendrix’s legendary Fillmore East concerts illustrated a critical turning point in a radiant career filled with indefinite possibilities. Earlier in 1969, The Jimi Hendrix Experience had closed a musical chapter and the guitarist assembled a new trio dubbed Band of Gypsys, consisting of Hendrix, his longtime friend Billy Cox, on bass, whom he had befriended when both were serving with the 101st Airborne Division Cox and Electric Flag drummer Buddy Miles, who would also contribute occasional lead vocals. Hendrix was inspired by his collaboration with Cox and Miles and this creative renewal drove the development of promising new material such as “Power Of Soul,” “Burning Desire” and the extraordinary “Machine Gun.” By the end of January 1970, the band was history, but the blend of funk, rock and soul pioneered by the trio had a profound impact. Notable devotees include funk pioneers Parliament-Funkadelic, Curtis Mayfield, the Isley Brothers and Bootsy Collins, extending all the way forward to hip-hop.

Newly mixed and restored in sequence without edits, fans can finally hear Hendrix, Cox and Miles blast through their genre-defying sets that included freshly written songs like “Earth Blues” and “Stepping Stone,” as well as supercharged Experience favorites inclusive of “Foxey Lady,” “Voodoo Child (Slight Return),” “Wild Thing,” “Hey Joe” and “Purple Haze.” Additionally, exciting new versions of Howard Tate’s “Stop,” “Steal Away,” by Jimmy Hughes and a searing “Bleeding Heart” by Elmore James highlighted the command that the trio had over blues & R&B music. The lavish package is filled with unseen photos from talent such as Fillmore East house photographer Amalie Rothschild, Jan Blom (whose iconic, color saturated images provided the original artwork for 1970’s Band of Gypsys) as well as Marshall Amplifier representative Marc Franklin, who had full access to the group in their dressing room backstage.  The booklet features remembrances from bassist Billy Cox and liner notes by author/journalist/filmmaker Nelson George.  Songs For Groovy Children was produced by Janie Hendrix, Eddie Kramer and John McDermott - the trio that has overseen every project for Experience Hendrix since 1995. The box set was mastered by Grammy-winning engineer Bernie Grundman.