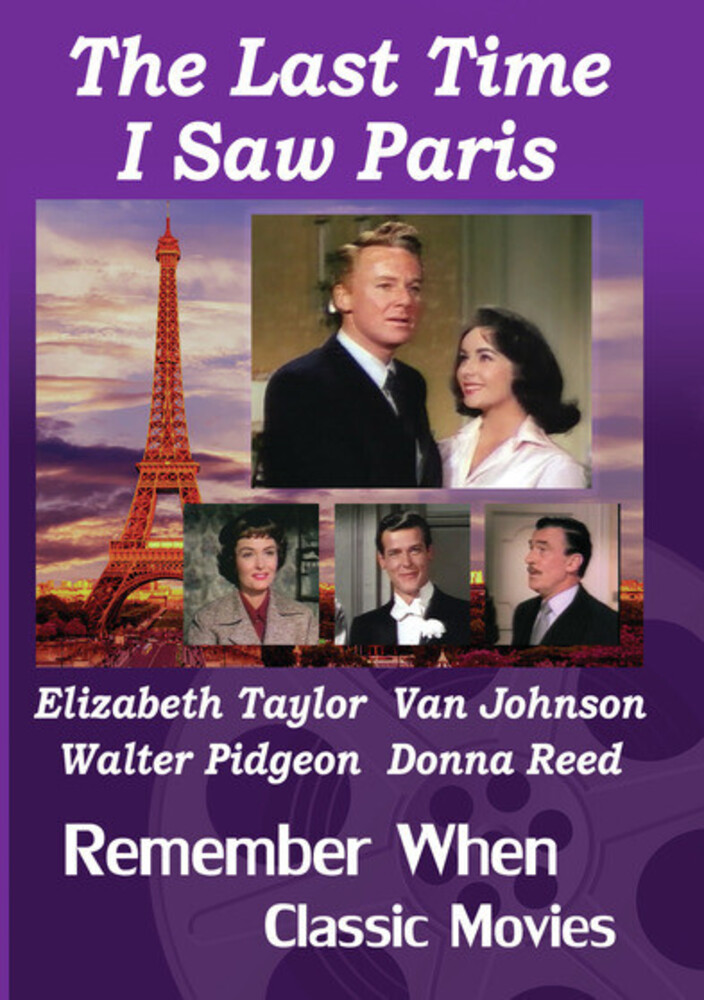 The Last Time I Saw Paris is a 1954 romantic drama starring Elizabeth Taylor, Van Johnson, Walter Pidgeon, Donna Reed, Eva Gabor and Roger Moore in his first Hollywood debut. As celebrations mark the end of World War II in Europe, journalist Charles Wills (Van Johnson) is covering the celebrations when a beautiful woman grabs and kisses him and then disappears. Charles follows the crowd to the cafe and meets another beautiful woman Marion Ellswirth (Donna Reed). Charles and Marion have an instant attraction and when Charles is invited to the Ellswirth house he finds the first woman who had kissed him is Marion's younger sister, Helen, (Elizabeth Taylor). Charles and Helen fall in love and get married. Helen (Elizabeth Taylor) lives by her beauty and sustains a life of luxury even though her family is flat broke. Marion, on the other hand, is serious-minded, conventional and grounded. Charles and Helen eventually have a daughter named Vickie (Sandy Descher). Marion, however, having lost out to Helen for Charles' affections, agrees to marry Claude (George Dolenz). Charles struggles to make enough money for he and Helen to live on, while unsuccessfully works on novels and looks after their daughter, Vickie. When Charles and Helen unexpectedly come into some wealth, Charles squanders the wealth, and he and Helen begin to live separate lives. Charles begins a dalliance with divorcee, Lorraine (Eva Gabor), while Helen begins a relationship with tennis player Paul Lane (Roger Moore). In a drunken stupor, Charles locks Helen out of their home and as Helen walks all the way to her sister's in the snow and rain she catches pneumonia. Lots of ups and downs in this packed-full plot, but the ending will leave you crying into your handkerchief. A beautiful love story loosely based on F. Scott Fitzgerald's famous 'Babylon Revisited'.