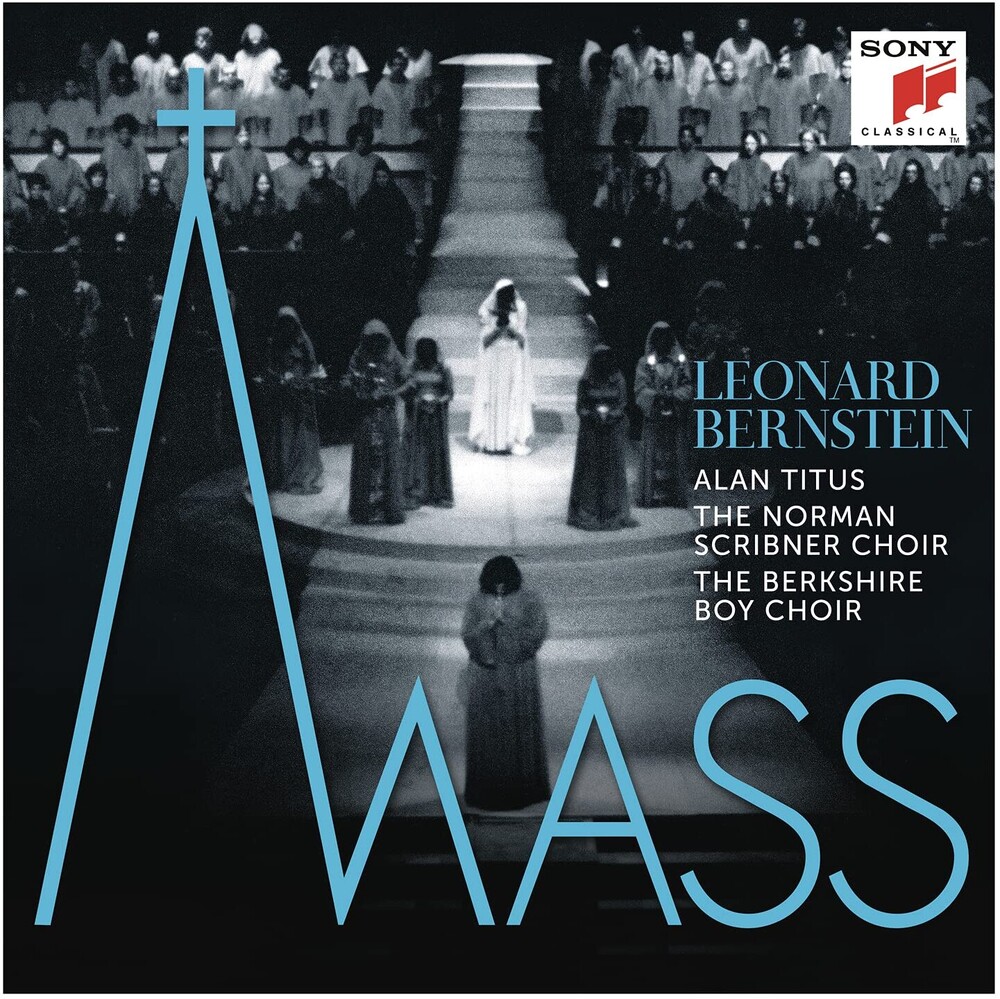 During his legendary tenure at the New York Philharmonic from 1958 to 1969, Leonard Bernstein composed only two works, Symphony No. 3: Kaddish (1963) and Chichester Psalms (1965). He had dedicated Kaddish to the memory of John F. Kennedy shortly after his assassination, and when Jacqueline Kennedy Onassis asked Bernstein to compose a piece for the 1971 inauguration of the Kennedy Center for the Performing Arts in Washington, D.C., he was eager to honor the occasion with a new, large-scale work because he knew he had always wanted "to compose a service of one sort or another." The son of Russian-Jewish parents, a social liberal, and lifelong activist, Bernstein made a surprising choice: the Roman Catholic Mass. But instead of a straightforward, purely musical setting of the Latin liturgy, he created a broadly eclectic theatrical event by placing the 400-year-old religious rite into a tense, dramatic dialog with music and lyrics of the 20th century vernacular, using this dialectic to explore the crisis in faith and cultural breakdown of the post-Kennedy era.

By the late 1960s, the country had become polarized over U.S. involvement in the Vietnam War. A powerful anti-war movement swept the nation, fueled by outrage at the draft, the massive casualties, atrocities such as the Mai Lai Massacre, incursions into Laos and Cambodia, the imprisonment of conscientious objectors and activists, and in 1970, the Kent State shootings. These turbulent times produced a restless youth culture that hungered for a trustworthy government and for spiritual authority that reflected their values. MASS gave them a voice.

Six months before the scheduled premiere, MASS was far from completion. Needing a collaborator, Bernstein decided to ask the young composer-lyricist Stephen Schwartz to work with him on the text. Schwartz had recently proven his ability to transform religious stories and rituals into contemporary theater with Godspell, his hit musical based on the Gospel of St. Matthew. The two writers hit it off and worked briskly to meet the deadline.

Bernstein and Schwartz envisioned MASS not as a concert piece, but as a fully staged, dramatic pageant. They mixed sacred and secular texts, using the traditional Latin liturgical sequence as the fundamental structure and inserting tropes in contemporary English that question and challenge the prescribed service, as well as meditations that demand time for reflection. They took the Tridentine Mass, a highly-ritualized Catholic rite meant to be recited verbatim, and applied to it a very Jewish practice of debating and arguing with God. The result was a piece that powerfully communicated the confusion and cultural malaise of the early 1970s, questioning authority and advocating for peace.

In MASS, the ceremony is performed by a Celebrant accompanied by a formal choir, a boys' choir, acolytes, and musicians. His congregation of disaffected youth (the "Street Chorus") sings the tropes that challenge the formal ecclesiastic dogma of the Church. As the tension grows and the Celebrant becomes more and more vested, the cynical congregants turn to him as the healer of all their ills, violently demanding peace. In a climactic moment, overwhelmed by the burden of his authority, the Celebrant hurls the sacraments to the floor and has a complete spiritual breakdown. The catharsis creates an opening for a return to the simple, pure faith with which he had begun the ritual (expressed in the sublime "A Simple Song"). Though MASS challenges divine authority, exposing its contradictions and questioning religion's relevance to contemporary life, it ultimately serves as a reaffirmation of faith and hope for universal peace.

The eclecticism of MASS's music reflects the multifaceted nature of Bernstein's career, with blues, rock, gospel, folk, Broadway and jazz idioms appearing side by side with 12-tone serialism, symphonic marches, solemn hymns, Middle Eastern dances, orchestral meditations, and lush chorales, all united in a single dramatic event with recurring musical motifs. Bernstein uses the uninhibitedly tonal rock 'n' roll of the Street Chorus to challenge the dogmatic, atonal music of the Church; ultimately, the musical argument is resolved with a glorious, tonal chorale ("Almighty Father") sung by the entire company.

MASS premiered on September 8, 1971, at the inauguration of the Kennedy Center, directed by Gordon Davidson, conducted by Maurice Peress, and choreographed by Alvin Ailey. The performance was fully staged, with over 200 participants. The pit orchestra contained the strings, percussion, a concert organ, and a "rock" organ; all of the other instrumentalists-brass, woodwinds, rock musicians- were on stage in costume and acted as members of the cast. The Street Chorus was made up of singers and dancers in contemporary dress, a 60-person robed choir filled the stage pews, and a complement of dancers costumed as Acolytes assisted the Celebrant.

During his work on MASS, Bernstein consulted with Father Dan Berrigan, a Catholic priest and anti-war activist who had been on the FBI's "10 Most-Wanted" list before being apprehended and imprisoned. In the summer of 1971, as MASS approached its premiere, the FBI warned the White House that the piece's Latin text might contain coded anti-war messages and that Bernstein was mounting a plot "to embarrass the United States government." President Nixon was strongly advised not to attend and was conspicuously absent at the premiere.

Responses to the premiere of MASS covered the spectrum. The Roman Catholic Church did not approve-some cities cancelled performances under pressure from their local Catholic churches-while other prominent clergy declared their support for the piece. Certain music critics disapproved of the mixing of genres, while others found the work to be inspired. For the most part, the audiences were deeply moved, experiencing firsthand the shared, communal journey of the composition.

Over the years, the ideas and dissent embodied in MASS, which were so threatening to the political and religious establishments in the volatile early-1970s, have become a more accepted part of spiritual and political discourse. MASS came full circle when, in 2000, Pope John Paul II requested a performance at the Vatican. Its radical mixing of musical styles, too, has also become less shocking and more accepted in the musical sphere. Time has revealed MASS to be a visionary piece that continues to be relevant and move audiences as it enjoys performances around the world.