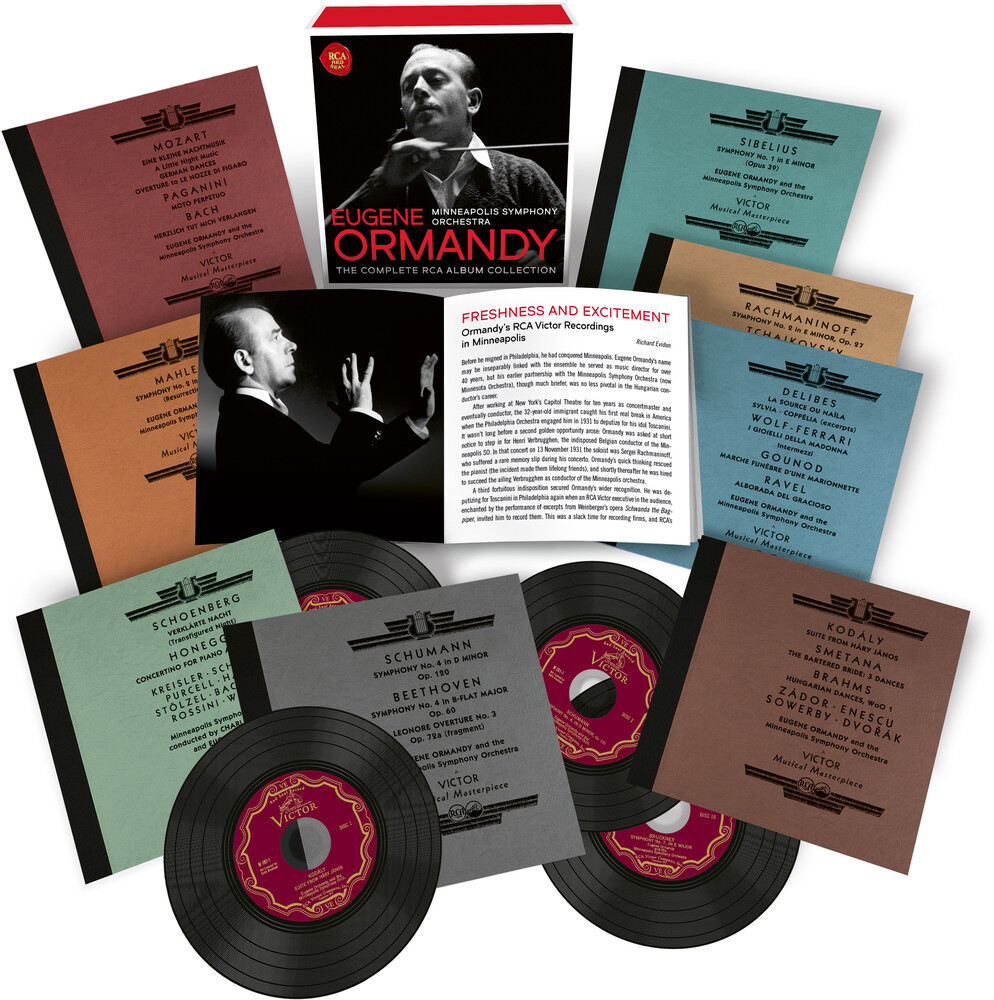 Eugene Ormandy's name is inseparably linked with Philadelphia and the orchestra he served as music director there for over 40 years. But before the advent of Ormandy/Philadelphia, there was another historic partnership - Ormandy/Minneapolis - which, though much briefer, was hardly less pivotal in the Hungarian conductor's career.

In 1931, after ten years of playing violin in and eventually conducting the orchestra of New York's Capitol Theatre, the 32-year-old immigrant got his first real break in America when the Philadelphia Orchestra engaged him to deputize for his idol Toscanini. Then a second golden opportunity promptly arose when Ormandy was asked at short notice to step in for Henri Verbrugghen, the indisposed chief conductor of the Minneapolis Symphony Orchestra. Before long he was appointed to succeed the ailing Belgian maestro.

A third fortuitous indisposition clinched Ormandy's bid for recognition: he was deputizing for Toscanini in Philadelphia again when an RCA Victor executive in the audience was so taken with his performance of excerpts from Weinberger's opera Svanda the Bagpiper that he invited him to record it. When contractual stipulations prevented the Philadelphia from taking part, Ormandy suggested that RCA transfer the project to Minneapolis, where he and the musicians were paid an annual salary and recordings could be made at no additional expense.

And so it was that the orchestra that Ormandy was quickly elevating into the ranks of America's most admired ensembles found itself making records from 17-23 January 1934 and 5-16 January 1935 at Northrop Auditorium on the University of Minnesota campus in Minneapolis. These long, intensive daily sessions yielded a bumper crop of recordings, encompassing a wide and adventurous repertoire which filled no fewer than 174 78-rpm sides.

"Ormandy was perhaps at his best during his Minneapolis days and in the early part of his long reign at Philadelphia", wrote a Gramophone critic in 1991, and more than a few other commentators have shared that opinion. The excitement of a live concert emerges from these mid-1930s recordings, not necessarily the rule in the conductor's later studio efforts. Sony Classical is now pleased to present the complete Ormandy/Minneapolis discography for the first time in a single collection. Many of these performances were never issued on LP, not to mention CD.

The 11-disc set contains major symphonic works which were still rarely heard when these recordings introduced them to music lovers all across the world. The pioneering 1935 version of Mahler's "Resurrection" Symphony dominated the record catalogues for nearly two decades, and it remains thrilling today (Gramophone, 1997: "This lithe and propulsive reading . One is immediately struck by the excellence of the orchestral playing secured by Ormandy in repertoire that was scarcely standard fare in the 1930s"). Ormandy and the Minneapolis SO were the first in the US to commit to disc Rachmaninoff's Second ("Fervently played and grandly recorded" - Gramophone, 1936) and Sibelius's First ("Mr. Ormandy seems to be squeezing every ounce of emotion out of it, and lovers of opulence will rejoice" - Gramophone, 1936), while their Bruckner Seventh was the first commercial American recording of any of that composer's symphonies.

The new box set also contains the recording world premières of Kodály's Háry János Suite, the string-orchestra version of Schoenberg's Verklärte Nacht and Honegger's Concertino for piano and orchestra, as well as American works such as Roy Harris's When Johnny Comes Marching Home, Charles Tomlinson Griffes's Pleasure-Dome of Kubla Khan and John Alden Carpenter's Adventures in a Perambulator. The electrifying performance of Enescu's Romanian Rhapsody No. 1, an Ormandy showpiece, was the first one of that work to reach a worldwide audience, while the selections from Weinberger's Schwanda - Ormandy's ticket to fame - also made their recording début in Minneapolis.

The conductor's only recording of Schumann's Fourth Symphony is here, as is his first recording of Beethoven's Fourth, plus Hungarian Dances by Brahms, dances and overtures by the Strauss family, Mozart's Eine kleine Nachtmusik, excerpts from Smetana's Bartered Bride, British folksong arrangements by Percy Grainger and much more.