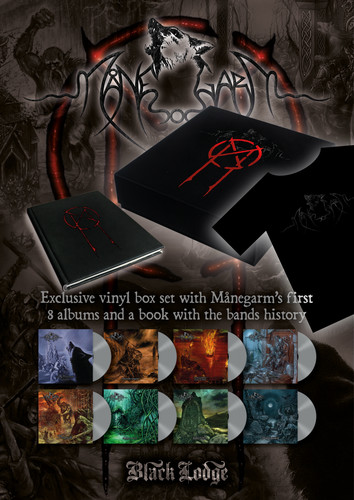 Bundle including eight vinyl LPs, book and medium t-shirt. Limited box set containing the first eight albums by the Swedish Viking/black metal band from Norrtälje. Includes book. This set includes the albums Nordstjärnans Tidsålder (1998), Havets Vargar (2000), Dödsfärd (2003), Vargaresa - The Beginning (2004), Vredens Tid (2005), Urminnes Hävd - The Forest Sessions (2006), Vargstenen (The Wolfstone) (2007) and Nattväsen (2009). The band was formed by Svenne Rosendal, Jonas Almqui, and Pierre Wilhelmsson in 1995. After finding another guitarist (Mårten Matsson) and a drummer (Erik Grawsiö), they began rehearsing as Antikrist. By 1996, they had changed their name to Månegarm, after the wolf of Norse legend, apt for a band concentrating on Viking metal, and early that year, they began recording their first demo collection.