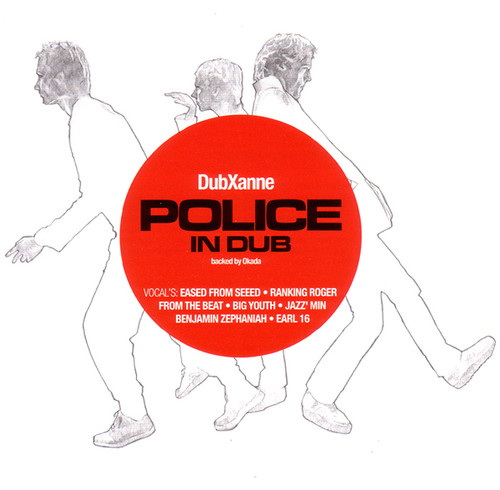 Hamburg group Dubxanne's 2008 album Police in Dub now available on 180-gram vinyl for the first time, with two bonus CDs containing the complete original album (EB 067 CD) and Rob Smith aka RSD's 2014 re-synchronized remixes (EB 104 CD). Dubxanne are devoted to bringing out the original dub roots from the biggest band in '70s-'80s Britain, The Police. At the apex of their career, The Police were a massive, bleached-blond juggernaut, surfing a new wave sound that valued intellectual cool and lightly sprinkled ethnic influences over the discredited rock 'n' roll bluster of old. The first post-punk supergroup. At the end of 1977, over the Christmas period, Stewart Copeland played Sting some of his reggae records. When Summers returned to Britain from his vacation in the United States, he found his bandmates newly inspired by Jamaican sounds. There is this terrible wrong-headed cliche that The Police were a white reggae band, protests Summers. We weren't at all. A white reggae band would be UB40. The Police was The Police. We took elements out of reggae, principally the bassline and tempo, and used them creatively... and that was the point of departure. Indeed it was. Reggae rhythms finally shook The Police free from post-punk rock convention and the rest has become history - to date, 40 million people all over the world have bought a Police record! The first recordings for Police In Dub started in September 2006. After exhaustive scrutiny of The Police's back catalog at EMI Music Publishing (which controls and manages the rights for Sting's songs) and lengthy negotiations with Sting's management team, final consent for the project was granted in March 2008. Now the world can enjoy dub versions of the biggest tunes by The Police. The musicians behind Dubxanne are members of the group Okada (backing band for Zoe, Maxim, Don Abi to name a few): Mykal (drums), Marcus (bass), Manougazou (guitar), and Guido Craveiro (guitar/keyboards; produced Moloko, Zoe and Bootsy Collins). Police in Dub also features such well-known vocalists as Big Youth, Ranking Roger from The Beat, Earl 16, Benjamin Zephaniah, Eased From Seeed, Jazz'min, and Joe Peng. Dubxanne's album is a unique masterpiece, paying respect to an influential super-group. This is massive roots reggae. Limited edition of 500 paginated and numbered copies.