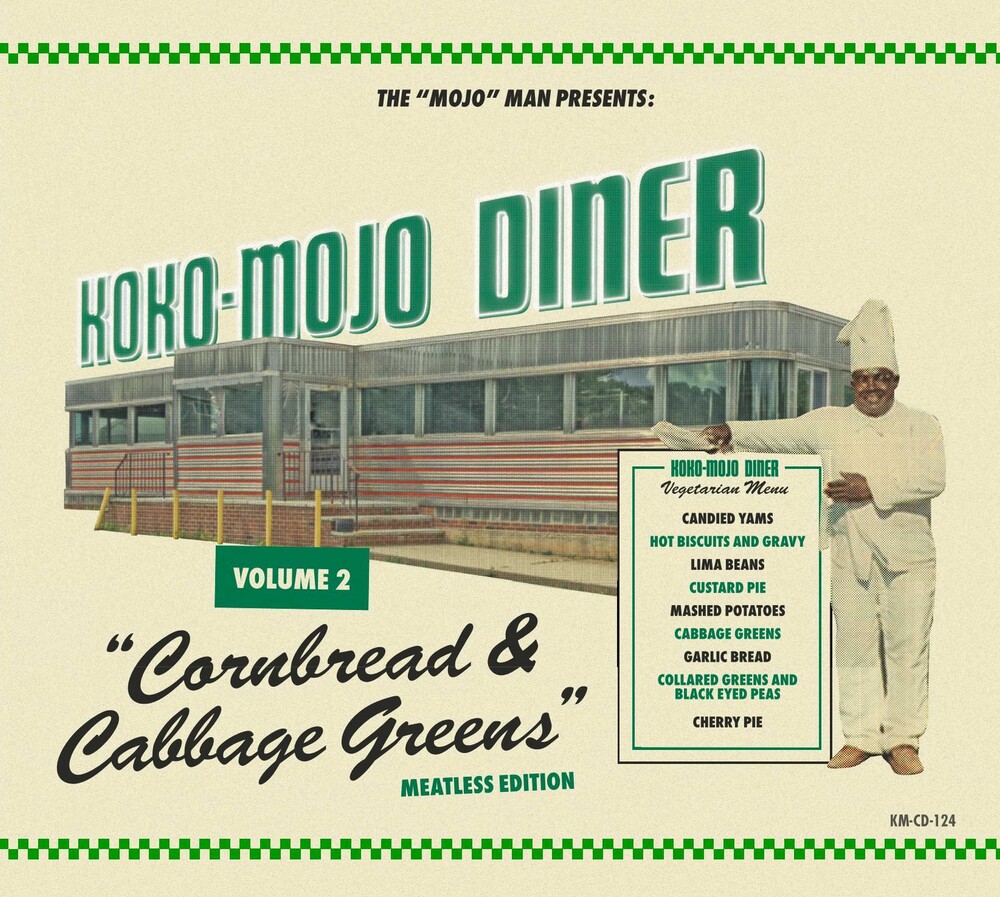 THE "MOJO" MAN SEZ: I'm proud to present a tasty selection of tunes about "Soul Food" and other stuff black folks like to eat on four complementary volumes. If you don't know what's this all about let me put y'all wise: Soul food is an ethnic cuisine traditionally prepared and eaten by African Americans, originating in the Southern United States. This cuisine originated with the foods that were given to enslaved West Africans on southern plantations during the American colonial period; however, it was strongly influenced by the traditional practices of West Africans and Native Americans. Due to the historical presence of African Americans in the region, soul food is closely associated with the cuisine of the American South although today it has become an easily identifiable and celebrated aspect of mainstream American food culture. It fashioned from the meager ingredients available to the slave and sharecropper black families. The meat used was usually the least desirable cuts (stuff white people would throw away) and the vegetables, some bordering on weeds, were all that was available for the black slaves to prepare nutritious meals for their families. From these meager ingredients evolved a cuisine that is simple yet hearty and delicious... Every ethnic group has what it calls "soul food" - soothing, comfort food that brings back warm memories of family dinners, however, today, the term "soul food" simply means African-American cuisine. Do you like "Kentucky Fried Chicken"? Colonel Sanders' original Kentucky Fried Chicken recipe was stolen from a black woman. Do you like to eat Potato Chips? Thank a black chef named George Crum. Do you like Jack Daniel's? A black man named Nathan "Nearest" Green taught Jack Daniel an ancient African technique that filtered liquor through a charcoal mellowing system. This technique is what gives Jack Daniel's Whiskey it's rich flavor and taste. Do you like to drink Coca-Cola or Pepsi-Cola? You can thank enslaved Africans. They brought the kola nut - one of the main parts of Coca-Cola - to what is now the United States. West Africans chewed the nut for it's caffeine. Enslaved Africans also brought watermelon, okra, yams, black-eyed peas, and some peppers. These foods are commonly eaten in the U.S. today. They show how Africans forced into slavery - beginning in the 1500s - influenced the American diet. Frederick Opie wrote a book about some of the foods that connect Africa and America. The book is called "Hog and Hominy: Soul Food from Africa to America." Opie explains that people who were bringing enslaved Africans to North America wanted to keep them alive and earn a profit. As a result, Africans on the slave ships were fed food they knew and liked. Those foods landed along with the people. Opie explains that fruits and vegetables brought from Africa grew well in America. One reason is that enslaved Africans planted their own gardens to help feed themselves. In time, the plants from Africa slowly moved from gardens of the enslaved to those of the wealthy and powerful. For example, the homes of U.S. presidents George Washington and Thomas Jefferson had gardens planted with seeds from Africa. Those fruits and vegetables changed the way cooks made pies in America. In England, pies were made with meat. African-Americans took the English meat pie and made it with fruit or vegetables, such as sweet potatoes. Enslaved cooks developed gumbo, jambalaya, pepper pot, and a mix of green leafy vegetables and pork called Hoppin' John. Some ways of cooking that are well-known in the U.S. today were reported in West Africa before 1500. They include deep-frying fish and barbecuing meats. These kinds of foods were critical to the creation of Southern, and in time American, food. Many of these foods with roots in African American culture came to be known as "soul food." The name was a way to identify food that African Americans began to create a long time ago to eat with dignity as enslaved people. The expression "soul food" originated around 1960 when the word "soul" began to be commonly and largely used to describe African American culture. Enjoy your meal, Y'all! Little Victor Mac (a.k.a. DJ "Mojo" Man)