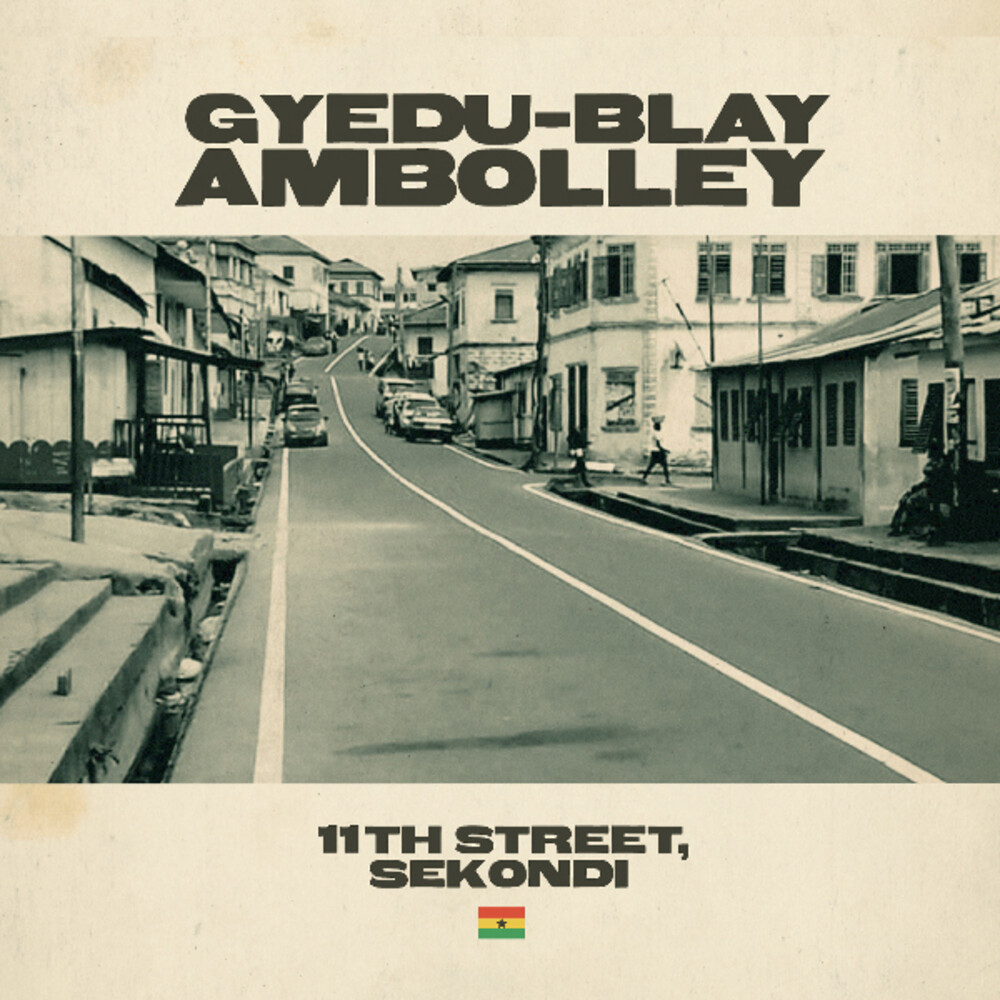 2LP version. Gyedu-Blay Ambolley was born on the 11th Street in Sekondi, Ghana 72 years ago. On the cover photo, on the right side, is the house of his birth, which was also his parental home. The Ghanaian legend's latest release 11th Street, Sekondi shows off a pride in his heritage, and his honed talent for mixing highlife with other genres like rap, Afro-funk and disco Ghanaian highlife. 11th Street, Sekondi is his 31st album since his debut in 1973. The charismatic stage personality, no stranger to mixing humor into his music and who has performed alongside Afrobeat legend Fela Kuti and highlife bandleader Ebo Taylor, has been a record collector's staple since his appearance on the seminal Ghana Soundz (SNDW 001LP, 2002), which re-introduced the world to his trademark Simigwa style. Highlife, which started in Sierra Leone and Liberia, took hold in Ghana in the 1940s as a coming together of the musicians fed up with the foxtrot and quickstep parties originally hosted by English colonists. It began with big band horns and happy lyrics, popularized by artists such as E.T. Mensah, before opening up in the '50s and '60s with a wave of guitar-driven, socially conscious and more danceable Afro-funk hits - a product of the easy movement of people between Nigeria and Ghana. It was then that Ambolley's trademark baritone vocals burst onto the scene, under the tutelage of close personal friend Taylor. Ambolley's latest album, named after the area of West Ghana in which he grew up, is a look back at the area and musical styles that shaped the musician's life. "Black Woman" is a funky number that opens the album with Ambolley on a tenor sax solo, while tracks like "Little Small Girl" showcase his renowned James Brown-influenced vocal flourishes. Soul, jazz, blues, and comedy are present - in keeping with his fervent belief that music must always be entertaining for the listener. The album is the second of his to be released German label Agogo records, after the acclaimed Ketan (2017). It also stays true to highlife's social ambitions, with reflections on the misguided pursuit of European ideals ahead of African values. Ambolley's career has been filled with accolades, including a Lifetime Achievement Award from the Charles R Drew University in Los Angeles, and formal recognition from the Ghanaian Embassy in Washington DC for producing the first ever commercially recorded rap album.