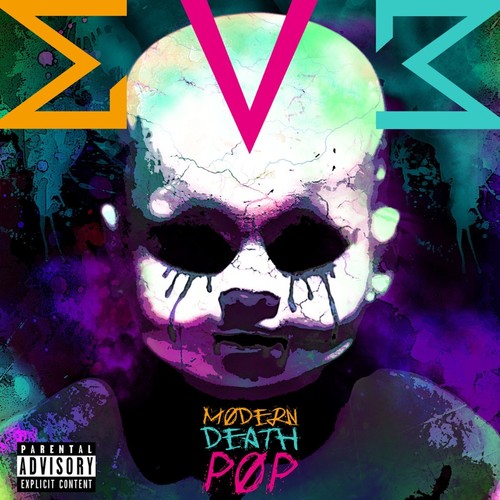 The unique mix of heavy riffs, banging blastbeats and extreme growls with electronic rhythms, synth-pads and pop sing-alongs makes this group from Germany's Dresden standout. "Modern Death Pop" is heavily recommended is to the fans of Eskimo Callboy or Enter Shikari! BIO: GROOVENOM are on a mission: The sextet from Dresden has lined up since 2014 up to blow some fresh air into the increasingly uniform metal sound and to declare war on the scene 'police' (i.e. hidebound people who set their sights on pointing out everything that goes against the established standards in metal and denouncing it as 'untrue') with a raised middle finger. Metalcore? Trancecore? Deathcore? Post-Hardcore? Or dance metal? With their third longplayer, the bustling shooting stars finally have an answer for all those, who futilely keep trying to put a stamp on their sound: This is MODERN DEATH POP, baby! Remaining true to their style, GROOVENOM merge solid down tuning-riffs, rough breakdowns, forceful growls and virtuosic drumming with techno beats, trendy sing-a-longs and rap parts in 12 bombastic new tracks. So in "Pu$$y Dance" classic metalcore meets with banging synthiepop and some easygoing whoo-hoos, while "FCK MTL" provocatively fields hiphop beats, a 90's euro-dance chorus and a hooting horn against the scene's purists, epic synthesizer walls link the rough vocals in "Proud 2 B Loud" to a stadium-worthy guitar solo and "Shut The F#ck App" comes up with an iconic 8-bit-style intro. Last but not least there's "Hallo Welt", which has been released as a single beforehand: An atypically gloomy, mature song featuring lyrics written in German language for the first time. MODERN DEATH POP has more glam, more pop, more slam that it's predecessor PINK LION, is multifarious, wonderfully nonconformist, inexorably danceable and goes right in the kisser. GROOVENOM means laughing, crying, moshing, raving and en passant making the world a better place! And MODERN DEATH POP is simply a must-buy for fans of ESKIMO CALLBOY or ENTER SHIKARI!