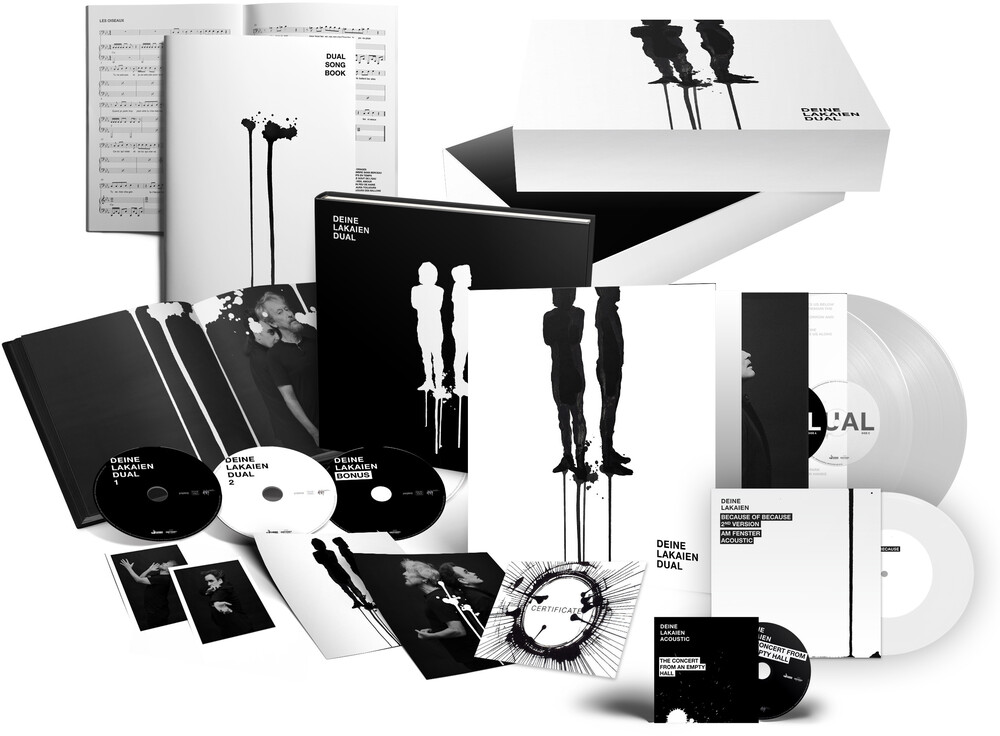 DEINE LAKAIEN are a German cultural icon. With their 10th studio full-length, "Dual", classically-educated composer and pianist Ernst Horn and vocalist extraordinaire Alexander Veljanov present a conceptual double album, which connects both full-lengths by a double reference. Half of the double album consists of 10 new songs that DEINE LAKAIEN have crafted with particular artists or songs in mind that have been important for the duo's musical evolution. These sources of inspiration are made clear on the second album of "Dual", which features 10 amazing cover tracks that range from Cat Stevens' classic 'Lady D'Arbanville' via Jacques Brels melancholic 'La chanson des vieux amants' to Kate Bush's 'Suspended in Gaffa' and the surprising choice of the Linkin Park song 'My December'. Each of these renditions has been lovingly translated into the Germans' unmistakable soundscape. In this artistic juxtaposition of a cover version and related new song, the Patti Smith/Bruce Springsteen collaboration 'Because the Night' corresponds with the Horn/Veljanov composition 'Because of Because'. DEINE LAKAIEN lay bare some of the sources of their inspiration and artists that have touched, inspired, thrilled, and shaped them in a most respectful way. DEINE LAKAIEN are once again breaking new ground, which they have achieved multiple times in their now 35-year history. Founded in 1985, the duo started as a purely electronic avant-garde dark wave project. Taking their name from a reference in the song 'Die genaue Zeit' by German experimentalists Einstürzende Neubauten, the band self-released "Deine Lakaien" in 1986, which spread by word of mouth and created an underground buzz. The debut set the duo clearly apart from electronic contemporaries such as YAZOO, SOFT CELL, EURYTHMICS, and OMD by virtue of their singular dark sound. The albums "Dark Star" (1991) and "Forest Enter Exit" (1993) considerably widened the Germans' audience and gained the attention of influential critics. Simultaneous with their growing success, DEINE LAKAIEN broadened their musical scope by playing a fully acoustic tour in 1992, an ambitious exercise that would influence later albums such as "Kasmodiah" (1999). Their impressive and highly diverse catalogue has been summarised in the anniversary releases "XXX. The 30 Years Retrospective" (2016) and "The 30 Years Retrospective: Live" (2018). DEINE LAKAIEN will release the eagerly awaited "Dual" on April 16, 2021, to the delight of a massive following that has been clamouring to finally receive the promised album. It is high time these visionaries bring forth their fascinating voice and unique music to the world once more. Complete Box incl. 3CD hardcover artbook, gatefold 2LP (180g, on exclusive transparent vinyl), bonus 7" single, live DVD "The concert from an empty hall", song book, 2 artprints, 3 postcards and handsigned/numbered certificate (999 copies available)