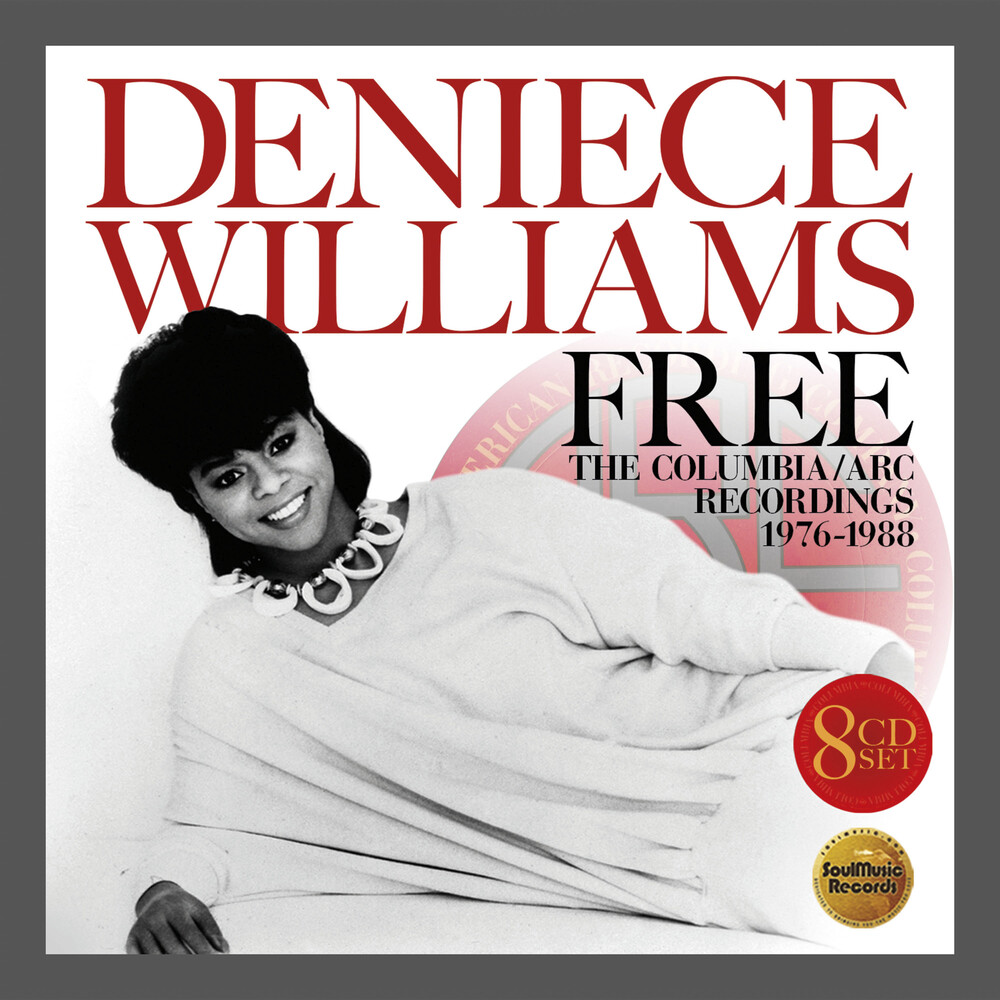 SoulMusic Records is very proud to present a deluxe box set of the 11 Columbia and ARC albums by award-winning icon Deniece Williams released between 1976-1988. A constant presence on the contemporary music scene as a soul, pop and gospel best-selling artist and distinguished songwriter, 'Niecy' (as she's been known since her early '70s tenure with Stevie Wonder's female background vocalists Wonderlove) has racked up over 25 charted hits, all of which can be found on the eight discs that comprise this first-of-it's-kind full showcase of Deniece's distinctive and influential music. Produced by SoulMusic. Com founder David Nathan, "Free: The Columbia/ARC Recordings" includes an outstanding in-depth essay by distinguished US writer Justin Kantor, with 2021 direct comments from Deniece herself along with interview quotes from the legendary Johnny Mathis as well as an array of producers, songwriters and collaborators involved with some of Niecy's albums, such as Nathan East, Bill Neale, Greg Mathieson, Monte Moir, Michael Jeffries, Diane Warren, and Michele Val Jean specifically for this project. With stunning artwork by Roger Williams and first class mastering by Nick Robbins, this beautifully-packaged set boasts 115 tracks that display Denice Williams' soulful artistry as a pre-eminent hitmaker and creative mainstay with a global audience. Disc 1: Combining her 1976 gold-certified debut solo LP, NIECY with the follow-up SONG BIRD (1977) - the former produced by the late Maurice White (of EW&F fame) and the late Charles Stepney, the latter produced by White - the 15 tracks include the timeless classic 'Free' and Niecy's long-time show closer 'God Is Amazing'. Disc 2: An expanded edition of THAT'S WHAT FRIENDS ARE FOR, 1978's international best-selling LP of duets with the iconic Johnny Mathis and three bonus tracks, the across-the-board global No. 1 'Too Much, Too Little, Too Late' as well as versions of The Bee Gees-penned 'Emotion' and a 1984 rendition of Major Harris' 'Love Won't Let Me Wait'. Disc 3: WHEN LOVE COMES CALLING (1979) with production by Ray Parker Jr. #and David Foster includes the R&B/dance hit 'I've Got The Next Dance'; and 1981's MY MELODY teams Deniece with legendary Philly soul producer/songwriter Thom Bell resulting in charted singles, 'Silly' and 'It's Your Conscience'. Disc 4: Deniece and Thom Bell followed up with 1982's NIECY included one of her biggest hits, a cover of The Royalettes' 'It's Gonna Take A Miracle'; while the 1983 set I'm SO PROUD marked the beginning of Niecy's work with late musical maestro George Duke on several tracks such as the title cut, a revival of the Curtis Mayfield-penned classic. Disc 5: LET'S HEAR IT FOR THE BOY (1984) - title track produced by George Duke - brought Deniece her biggest global smash as well as the classic 'Black Butterfly' while she began producing herself (with Greg Mathieson) for a number of cuts for the LP as well as the follow up album, 1986's HOT ON THE TRAIL. Disc 6: Standalone reissue of 1987'S WATER UNDER THE BRIDGE, produced by Steve Levine (known for his work with Culture Club and many others), features US R&B charted singles 'I Confess' and 'Never Say Never'. Disc 7: 1988's AS GOOD AS IT GETS completed Niecy's Columbia tenure, with production by Monte Moir (Of The Time), Brad Westering and George Duke and includes the Michael Jackson-co-penned 'We Are Here To Change The World' and Top 10 US R&B hit 'I Can't Wait'. Disc 8 comprises 15 tracks with a selection of single edits including the Verdine White co-penned 'Baby, Baby My Love's All For You' (1977) and 'Do What You Feel' (1983) as well as 12" disco mixes of 'I Found Love' (1979), the 12" version of 'Let's Hear It For The Boy' (1984) and 12" extended versions of 'Wiser And Weaker'(1986) and 'Never Say Never' (1987).