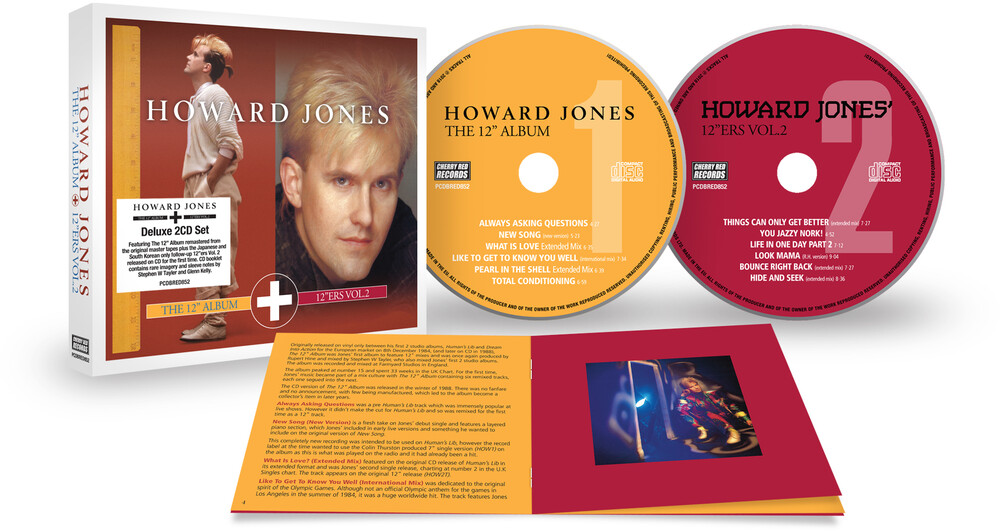 Two albums of 12-inch mixes that brought Howard Jones to new audiences in 1984 and 1985. Remastered from the original master tapes, four of the tracks on disc one's 'The 12" Album' are previously unreleased by Cherry Red on CD in this remastered format. The second disc features the first official release of '12"ers Vol 2' outside of Japan and South Korea. Complete with and inner sleeve contains new sleevenotes by Stephen W Tayler (who mixed the tracks on 'The 12" Album' and '12"ers Vol 2') and Glenn Kelly plus rare imagery. On the original vinyl release of '12"ers Vol 2', the track listing stated that the extended mix of 'Bounce Right Back (AKA Cause & Howard Jones Effect Remix)' was used. However, due to an issue relating to the length of the track and the space available on the vinyl, the 7" mix was used instead. This release see's the extended version as originally intended. Originally released on vinyl only between his first two studio albums ('Human's Lib' and 'Dream Into Action') for the UK and European market in 1984 (and later on CD in 1988). 'The 12" Album' was Jones' first album to feature 12" mixes and was once again produced by Rupert Hine and mixed by Stephen W Tayler, who also mixed Jones' first two studio albums. The album was recorded and mixed at Farmyard Studios in England. The album peaked at number 15, spent 33 weeks in the UK Chart and was certified Gold selling in excess of 100,000 copies. For the first time, Jones' music became part of a mix culture with 'The 12" Album' containing six remixed tracks, each one segued into the next. Later In 1984, 'The 12" Album' was released in Japan as 'Howard Jones' 12"ers', which has the same tracks as 'The 12" Album', but sequenced in flipped order, starting with 'Like To Get To Know You Well' on side one, and 'Always Asking Questions' on side two. Following on from Howard's success in Japan, Warner Music in Japan then released 'Howard Jones 12"ers Vol 2' a compilation of 12" versions taking in tracks from both the 'Human's Lib' and 'Dream Into Action' albums.