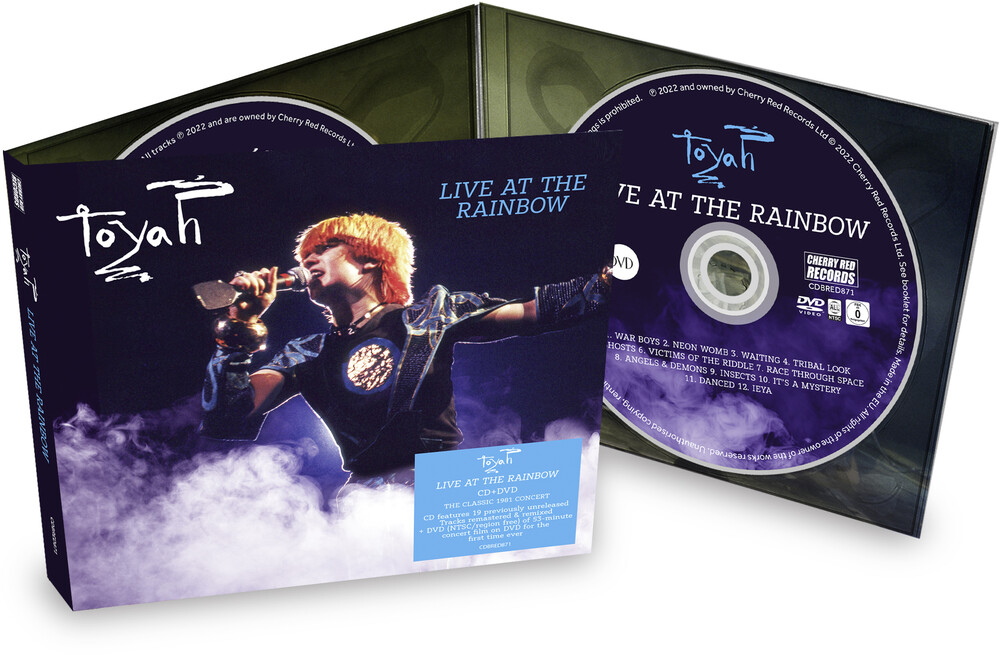 Remastered and expanded release, the fifth in the Toyah re-issue programme from Cherry Red. Featuring the original 12-song concert film released for the first time ever on DVD, much requested and sought after by fans for decades. The previously unreleased concert audio is released for the first time ever on CD with seven additional songs, all previously unheard and unreleased; restored exclusively for this release. These include 'Bird In Flight', 'Mummies', 'Computer' and 'Love Me'. The 53-min concert film has been remastered for this release with improvements to both picture and sound. The newly remixed and remastered audio has been integrated to the concert for an enhanced viewing experience. For this release, the original Rolling Stones multitrack reels have been revisited and remixed from scratch by Nick Watson at Fluid Mastering to create a new full stereo mix of the gig for the first time in it's history. All audio remastering was approved by Joel Bogen. Three of the seven unheard songs appear exclusively on the CD as mono-only (originally mixed by Nick Tauber) bonus tracks, where no existing multi-tracks were available to present new stereo remixes. These do not appear on the 16-song vinyl LP edition. Toyah provides a brand-new introduction in the 24-page booklet which contains stunning iconic live photography by Barry Plummer and new notes by Craig Astley, Toyah's official archivist. Celebrating the much-loved February 1981 concert at North London's legendary Rainbow Theatre, this hotly anticipated release marks the first time ever the concert film has been issued on DVD, following an early 1980s release on VHS and laserdisc. Simultaneously, it is the first time ever the audio, recorded on the Rolling Stones' Mobile Unit, has ever been officially released. At the time, the Toyah band had seen a new line-up with Willcox and Joel Bogen joined by Nigel Glockler, Phil Spalding and Adrian Lee. In February 1981, the lead track 'It's A Mystery', from the EP 'Four From Toyah', rose up through the charts and following an appearance on BBC's Top Of The Pops, saw the band crossover to mainstream singles chart success. This concert, originally due to take place at the Lyceum, was upgraded to the Rainbow following the EP's success. Safari Records decided to capture this unique moment in history as the band were ascending to greater fame and recognition. Directed by Stephen Waldorf, the concert was licensed to the BBC for a shortened edit for broadcast on television and a release on the BBC Video label, newly launched at time of it's original release in late 1981. DVD NTSC 0